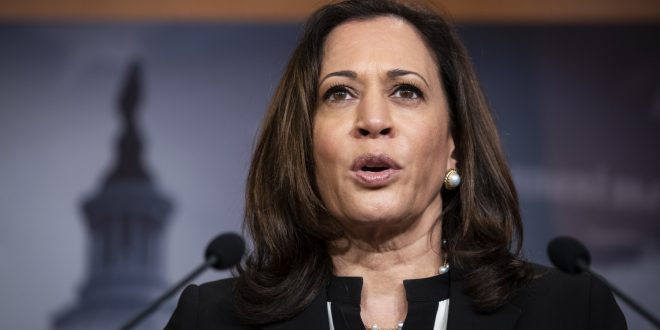 Harris took both rapid and PCR tests, which came back positive, her office said. She “has not been a close contact” of President Biden or first lady Jill Biden, the vice president’s office said, citing their travel schedules.

“She has exhibited no symptoms, will isolate and continue to work from the Vice President’s residence,” Harris spokeswoman Kirsten Allen said in a statement.

“She will follow CDC [Centers for Disease Control and Prevention] guidelines and the advice of her physicians. The Vice President will return to the White House when she tests negative,” Allen added.

Harris, who is fully vaccinated and boosted, tested positive for COVID-19 weeks after a number of leading congressional Democrats and Biden administration officials also contracted the virus.

Harris had been slated on Tuesday morning to receive the President’s Daily Briefing alongside Biden, and it’s unclear if that meeting took place.

Harris traveled to California last week, first to Los Angeles for a Democratic National Committee fundraiser and then to San Francisco and back to Los Angeles. She returned from Los Angeles on Monday.

Ashish Jha, White House COVID-19 response coordinator, said that he is not privy to conversations about if Harris is receiving therapeutics in light of her positive test. He also cited the importance of vaccinations and therapeutics in dealing with the spread of the BA.2 variant.

“If you take a step back and look at the vice president, she is boosted, actually twice boosted. We have a very, very contagious variant out there. It is going to be hard to ensure that no one gets COVID in America. That’s not even a policy goal. The goal of our policy should be, obviously minimize infection whenever possible but to make sure people don’t get seriously ill,” he said.

Harris’s husband, Doug Emhoff, became the first member of the first and second couples to contract COVID-19. He tested positive on March 15, which lead to a flurry of questions over Harris’s contact and if she should be wearing a mask around the president and others. She continued to test negative during Emhoff’s stint with the coronavirus.

Earlier this month, Speaker Nancy Pelosi (D-Calif.) had the coronavirus, as did Attorney General Merrick Garland.

The White House recently first acknowledged that Biden could get COVID-19 amid the uptick in positive cases surrounding the president earlier this month.

“I wouldn’t say it’s just a matter of time, but I of course it is possible that the president, like every other American, could get COVID,” Jha said on Tuesday. “There is no 100 percent anything.”

Psaki was asked to respond to a hypothetical question about the line of succession if Biden were to also get COVID-19 and both he and Harris become “very ill.”

“Well, technically the Speaker of the House is the third in line. So, there you go. No, I’m just confirming that for you. It is true, as we’ve noted many times, it is possible the president could test positive. We will be very transparent with you if that were to happen,” Psaki said.

She added though that she thinks Biden would be able to continue his presidential duties if he were to test positive.

“He has access to the best health care in the world, and we believe, because of all the precautions and steps we have taken that he would be able to continue his duties, as the vice president is as well as vice president,” she said.

Officials stress that he is vaccinated, and Psaki said last week that it wouldn’t be a failure of the precautions in place to protect Biden if he were to get the virus.

Psaki on Tuesday told reporters not to expect updates to protocols, including masking protocols, within the White House in light of Harris’ positive test.

She noted there is a regular testing cadence for the president and vice president, as well as officials around them, and that there is social distancing in meetings and a number of aides choose to wear masks.