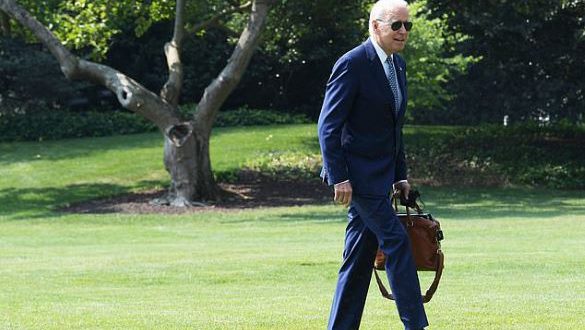 Joe Biden was evacuated to a fire station and two military jets were scrambled after a light aircraft veered into airspace over the president’s Delaware beach house.

The 79-year-old and his wife Jill were rushed from the home to the secure location in Rehoboth following the breach on Saturday afternoon. The plane was immediately escorted from the restricted airspace.

Preliminary investigation revealed the small private plane entered the restricted airspace ‘by mistake’ and there was ‘no threat to the President or his family,’ a Secret Service spokesperson confirmed.

Biden was spotted in the back of his car Saturday as his presidential motorcade raced down the street and away from the holiday home.

The assembly of vehicles was seen driving straight into the Rehoboth fire station at 12.45 pm before security services swept the area clear of bystanders.

Biden left again at 1.29 pm after staying in his car with his wife inside the compound the whole time.

Local resident Susan Lillard told CBS News she saw a small white plane flying over the area where the president’s house is.

She said two military jets were quickly scrambled and soared across the sky above her during the dramatic response.

The Bidens were spending the weekend in Rehoboth to celebrate Jill’s birthday, which was Friday, CNN reported.

Biden did not have any scheduled events for Saturday so the group of pool reporters that traveled with the president was not part of the motorcade.

The restrictions include a 10-mile radius no-fly zone contained with a 30-mile restricted zone.

Federal regulations require pilots to check for flight restrictions along their route before taking off. Still, accidental airspace breaches, particularly around temporary restricted zones, are common.

U.S. military jets and Coast Guard helicopters are often used to intercept any planes that violate the flight restrictions around the president.

Intercepted planes are diverted to a nearby airfield where aircrews are interviewed by law enforcement and face potential criminal or civil penalties.