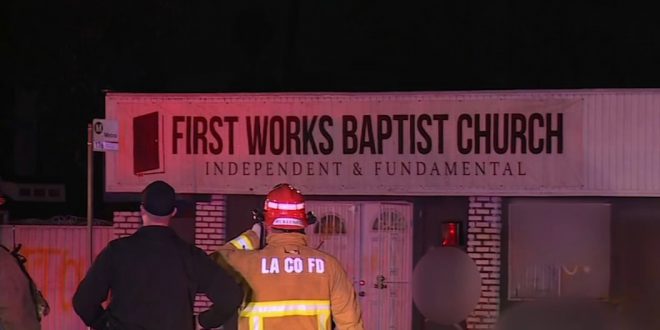 A California church that espouses anti-LGBTQ beliefs and has been the recent target of protests was bombed with an improvised explosive device early Saturday morning, authorities said.

The First Works Baptist Church in El Monte, California, just east of downtown Los Angeles, was shaken by a blast in the early morning hours Saturday, according to the FBI. When responding to the scene just after 1 a.m. local time there was smoke coming out of the windows and the outside of the church was covered with graffiti, the Los Angeles County Fire Department said.

“It appeared that the walls to the church had been vandalized as well as all the windows,” El Monte police Lt. Christopher Cano told reporters Saturday. “[The windows] appeared at first to be smashed, then we realized that the windows were not smashed, that they had actually blown out from some type of explosion.”

The FBI referred to the explosion as an “IED attack” and said bomb technicians were on the scene investigating.

The FBI responded overnight with @elmontepolice & @LASDHQ to an #IED attack at the First Works Baptist Church in El Monte, CA. Bomb Techs & the FBI's Evidence Team continue to process the scene. If you have a tip about the responsible party, please call 3104776565. #SeekingInfo pic.twitter.com/LobrjbrZtx

The church’s teachings condemning same-sex marriage have attracted criticism and protests. An online petition by Keep El Monte Friendly, a group that organized the protests against First Works Baptist Church, to expel the church from El Monte has received more than 15,000 signatures.

Researchers at the Southern Poverty Law Center have classified the church as one of 70 hate groups in the country that promote anti-LGBTQ sentiments.

It is part of the New Independent Fundamental Baptist Movement, fewer than two dozen churches in the United States that are associated with anti-LGBTQ pastor Steven Anderson. Anderson has been banned from 34 countries for his rhetoric that calls for the deaths of LGBTQ people, according to the civil rights group.