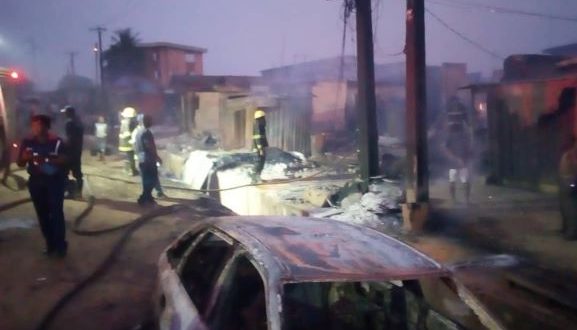 Scene of the Abule Egba inferno

Three persons died and many vehicles, houses and shops were burnt in a terrible fire that engulfed Abule Egba, a Lagos suburb early today.

The fire was triggered by oil thieves who breached the NNPC pipeline carrying petrol to depots.

According to Lagos State Emergency Management Agency(LASEMA), the fire was caused when an ignitable object came in contact with petrol spillage in “what appears to be bunkering activities”. 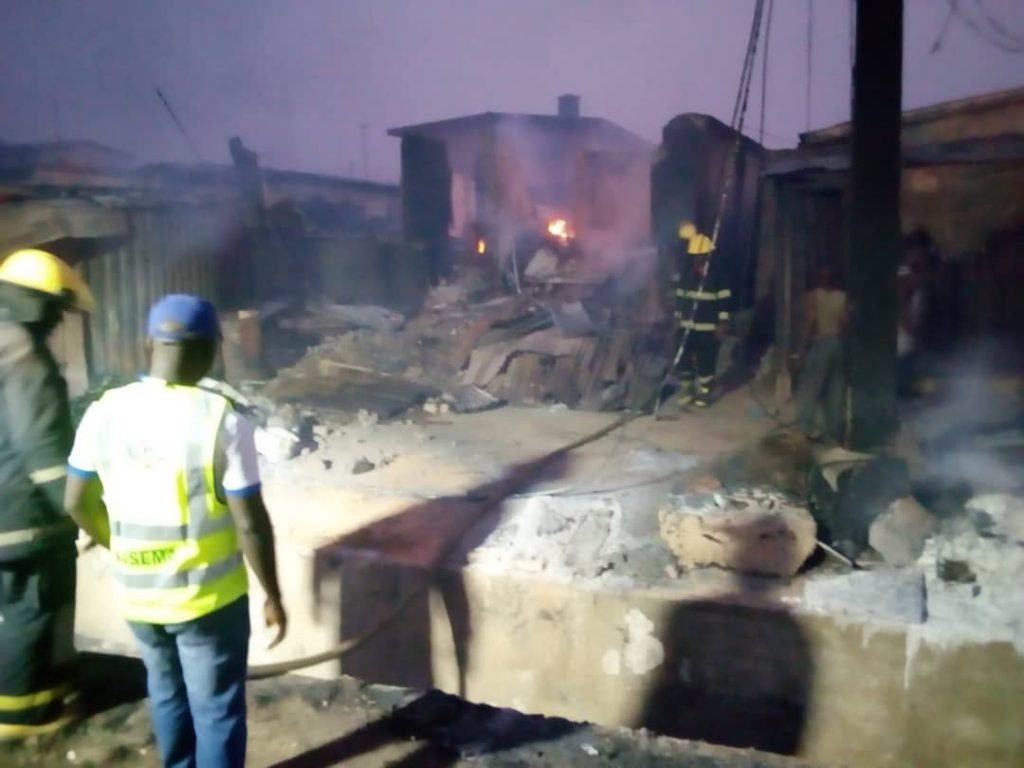 The impact resulted in inferno as it ravaged houses and cars, the agency said.

After several hours of battling the fire, LASTMA, the traffic agency reported that the “Situation is now confirmed calm, normalcy restored”.

Meanwhile, an oil marketer has called on the Federal Government to impose tougher penalties against petroleum pipeline thieves, as their action affects the socio-economic growth of the nation.

Alhaji Debo Ahmed, the Chairman, Independent Petroleum Marketers Association of Nigeria (IPMAN) Western zone chairman, gave the advice in an interview with the News Agency of Nigeria (NAN) in Lagos on Wednesday.

He said the vandals at the moment are treated with kid gloves, such that some of them would walk the streets freely two months after arrest.

Ahmed described this as ridiculous.

“The punishment for vandalism of petroleum pipelines is weak. One discovered that if these vandals are caught within two to three months, he or she will become a free man.

“These criminals will now come back and start threatening those that gave information for their arrest.

“The security personnel securing the pipeline should also be questioned or changed totally as it was alleged that they also compromised,’’ he said.

Ahmed urged the government to investigate some of the pipelines vandalism as it was allege that some officials of NNPC are also involved.

He alleged that some “bad eggs’’ among the NNPC officials were collaborating with the vandals to siphon petroleum products.

“In the past, if Pipelines and Products Marketing Company, (PPMC) pumped 500,000 litres of water, all the water would get to destination without a drop siphoned.

“How do they know the actual time they are pumping these products if not that there are saboteurs among officials of PPMC?’’ he said.

The IPMAN helmsman said that if the government could impose tough penalty against these vandals, they would desist from the act.

Alhaji Ayo Alanamu, the IPMAN Chairman, Ejigbo Satellite Depot urged government to reshuffle the surveillance security personnel monitoring the pipelines as most of them had compromised.

Alanamu said that government should pronounce immediate execution of any vandals caught siphoning products from the network, adding that this would serve as deterrent to others.

He urged the Nigerian National Petroleum Corporation (NNPC) to protect petroleum pipeline network across the country with monitoring gadgets, in other to track down vandals.

He said that the measure was necessary due to the increasing activities of vandals in the pipelines area.

The IPMAN boss said that if electronic gadgets were installed on the pipeline network in the area, it would alert security agents whenever the pipelines were being vandalised.

“The use of security personnel to conduct surveillance on the pipelines could not be adequate because of the magnitude of the network.

According to him, the size of the network and the inadequate security coverage give the hoodlums opportunity to vandalise the pipelines.

“We appeal to NNPC and security agencies to redouble their effort in protecting pipelines because residents within the locality can no longer sleep with their two eyes closed.

“We are imploring the government to help us to get rid of these people because their activities can cause a lot of damage to the entire community,” he said.