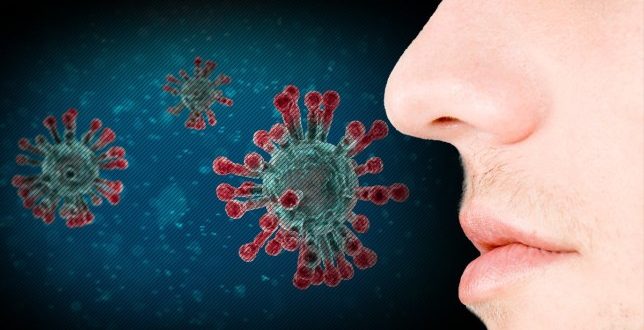 Unraveled: How Covid-19 robs patients of their sense of smell

Scientists claim to have finally discovered how the coronavirus can cause patients to lose their sense of smell.

Until now, researchers were baffled as to why some infected patients were robbed of their senses.

Harvard Medical School researchers investigated the ‘devastating’ symptom — and say it’s ‘good news’ because the loss of smell doesn’t appear to be permanent.

They found sensory neurons, those that detect smell and send it to the brain, are not vulnerable to Covid-19.

Instead, it is cells that provide key structural support to those sensory neurons which are infiltrated by the virus, explaining the loss of smell.

But the experts say it means sensory neurons do not need to be ‘built from scratch’ — which could take months or never happen at all.

It offers hope to those who had feared their loss of smell was permanent. Research has suggested this could be a problem for 10 per cent of sufferers.

The study, published in the journal Science Advances, was written by senior author Dr Sandeep Robert Datta, an associate professor of neurobiology.

He said: ‘I think it’s good news, because once the infection clears, olfactory neurons don’t appear to need to be replaced or rebuilt from scratch.

‘But we need more data and a better understanding of the underlying mechanisms to confirm this conclusion.’

Temporary loss of smell, or anosmia, is recognised as one of the main symptoms of Covid-19, along with a fever and persistent cough.

A dysfunction in smell can indirectly cause problems for taste, seeing as the two senses are linked.

Dr Datta said: ‘Anosmia seems like a curious phenomenon, but it can be devastating for the small fraction of people in whom it’s persistent.

‘It can have serious psychological consequences and could be a major public health problem if we have a growing population with permanent loss of smell.’

He and an international team of scientists sought to answer whether anosmia was permanent by analysing thousands of individual cells found in the noses of humans, mice and primates.

The academics looked at what genes were expressed by each cell — information which they already had at their fingertips from previous studies.

They focused on ACE-2, which controls receptors of the same name that act as a gateway for the virus to enter cells in the respiratory tract.

They also looked for the gene TMPRSS2, which encodes an enzyme thought to be important for the SARS-CoV-2 virus to enter cells.

Neither gene was expressed by olfactory sensory neurons, which detect and transmit information about smells to the brain.

Both ACE-2 and TMPRSS2 are expressed by two specific support cells that help to relay scents to the brain and are found in the olfactory epithelium — in the roof of the nasal cavity.

The two cell types are sustentacular cells, which wrap around sensory neurons and are thought to give structural support, and basal cells, which act as stem cells that regenerate the olfactory epithelium after damage.

Both types expressed ACE-2 at similar levels to what has been observed in cells of the lower respiratory tract, the most common targets of SARS-CoV-2.

This suggests they are the most vulnerable to infection because the virus is more able to enter.

People would lose their smell because a temporary loss of function of supporting cells would indirectly cause changes to olfactory sensory neurons — but not damage.

Dr Datta said: ‘We don’t fully understand what those changes are yet.

‘Sustentacular cells have largely been ignored, and it looks like we need to pay attention to them.

‘Our findings indicate the novel coronavirus changes the sense of smell in patients not by directly infecting neurons but by affecting the function of supporting cells.’

This structure in the forebrain receives signals from olfactory sensory neurons and is responsible for initial processing of a new smell.

Neurons in the olfactory bulb did not express ACE-2 or TMPRSS2 gene, backing up the findings.

In the majority of cases, SARS-CoV-2 infection is unlikely to permanently damage the cells needed for sensing smell, the study implies.

It had been feared that the coronavirus pandemic would lead to millions of people globally never retrieving their smell again.

One in ten people who endure mild disease still struggle to smell or taste one month after illness, according to research on a small group of Italians.

The study found just half of those with the symptom had fully regained their sense of taste and smell a month into their recovery.

Dr Claire Hopkins, one of the researchers and president of the British Rhinological Society, told the BBC: ‘Data from other viral illnesses, and some of the new data we are gathering, suggest the vast majority of people will get better but for some, recovery will be slow.

‘For people who recover more quickly it is likely the virus has only affected the cells lining their nose.

‘For people who recover more slowly it may be that the virus has affected the nerves involved in smell, too. It can take longer for these nerve cells to repair and regenerate.’