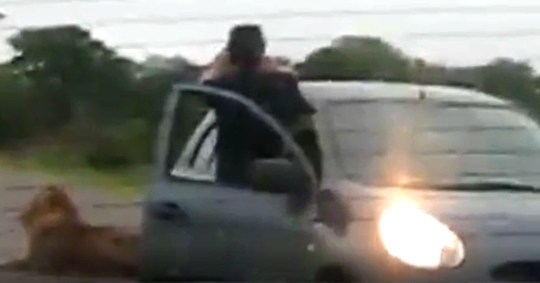 The man got out of the car to take pictures

A tourist without much regard for his own safety was spotted jumping out of his car to get closer to a pride of lions.

He started snapping pictures of the dangerous predators, with nothing to protect him if one of the lions decided it was hungry.

The disturbing moment was caught on camera by another tourist at near Orpen Rest Camp at Kruger National Park in northeastern South Africa last Tuesday.

Thankfully, the two lions in the road don’t react to him. Visitors to the park are told not to get out of their vehicles because of the danger from wild animals.

The video shares a resemblance to another viral video, when a woman climbed into the lion enclosure at the Bronx Zoo located within Bronx Park, in the Bronx, in New York.

She was filmed apparently trying to provoke a lion, in a video posted on Instagram with the caption ‘you will not believe what happened next’.

The zoo has condemned the video, confirming staff were alerted that someone climbed over a safety barrier at its African lion enclosure on Saturday. A spokesperson said: ‘This action was a serious violation and unlawful trespass that could have resulted in serious injury or death. ‘Barriers and rules are in place to keep both visitors, staff and animals safe. ‘We have a zero tolerance policy on trespass and violation of barriers.’