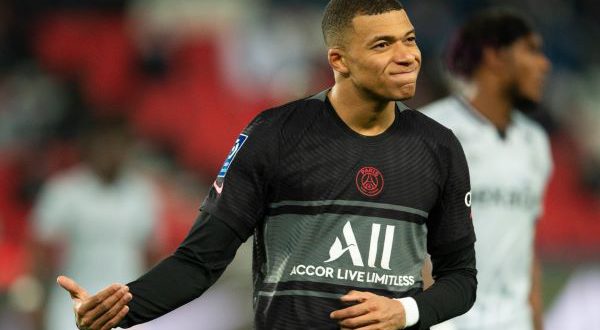 Kylian Mbappe has agreed on a deal to join Real Madrid from Paris Saint-Germain in the summer which will see him earn an incredible £800,000-a-week with the Spanish giants.

The 23-year-old striker is out of contract with PSG at the end of the season and is now free to negotiate with clubs outside France.

Real Madrid made enormous bids to try and sign Mbappe last summer, with PSG rejecting an offer of £170m and instead allowing him to leave on a free transfer this year.

Given that Real are getting the prolific forward for no transfer fee, they have been able to splash the cash on his wages and that is exactly what they will do.

Bild report that the Frenchman will be earning £41.6m-a-year at the Santiago Bernabeu, or £800k-a-week.

Real Madrid president Florentino Perez admitted earlier this season that he could not believe PSG had turned down their offer for Mbappe and that it will come to him leaving at the end of his deal.

‘Now we offer €200m (£170m) for a single player and they don’t sell him. When players finish their contract it’s better.’

Real Madrid are also expected to sign Erling Haaland from Borussia Dortmund in the summer, emerging as favourites for the Norwegian.

The 21-year-old has a release clause worth just €75 (£63m) in the summer and Real are keen to activate it and team him up with Mbappe in what should be a lethal partnership.

Asked about the two young strikers by Diario AS, Real goalkeeper Thibaut Courtois said: ‘Obviously, they are two great players, very young, that are marking a new chapter.

‘But this is not a theme for me. They are other people and they will have to decide.

‘But it is evident that they are two cracks (top players) and if they play in your team, it’s better than if they are against you.’