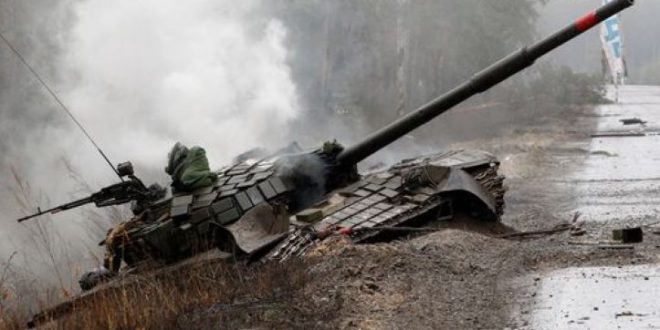 Ukraine’s President Volodymyr Zelensky said that Western heavy weapons are starting to have an effect on the battlefield but urged speedier deliveries, particularly of antiaircraft systems, as Russia continued lobbing missiles into Ukrainian cities.

While heavy fighting continued in the eastern Donbas region, Ukrainian troops disembarked on the contested Snake Island in the Black Sea and planted a Ukrainian flag on it for the first time since Russia seized the island in February, according to footage posted Thursday by Kyiv.

Russian forces withdrew from Snake Island last week, after coming under long-range missile and artillery barrages that were enabled by Western military supplies. The island controls shipping lanes in the Black Sea that Ukraine hopes to reopen to export its agricultural goods.

It wasn’t clear whether any Ukrainian personnel remained on the tiny island after reclaiming it. Two Russian missiles struck Snake Island’s landing pier Thursday, according to the Ukrainian regional administration. Russia’s Defense Ministry said its aircraft killed some of the Ukrainian troops on the island while the rest fled to the mainland near Odessa. There was no independent confirmation of the Russian claim.

The U.S. and allies have sent close to 200 NATO-standard 155 mm howitzers to Ukraine in the past two months, helping offset Russia’s huge firepower advantage, and have started delivering Himars multiple-launch rocket systems that Kyiv in recent days successfully used to strike weapons depots and fuel-storage facilities across Russian-held parts of Donbas.

“We finally feel that the Western artillery that we received from our partners is working very powerfully. Its precision really is at the level that we need,” Mr. Zelensky said in a late Wednesday address. “Our defenders carry out painful strikes against warehouses and other important logistic nodes of the occupiers. And this materially lowers the offensive potential of the Russian army.”

Ukraine, however, has yet to receive sophisticated air-defense systems that it says could protect its cities from Russian missile strikes.

Germany earlier this year promised a citywide Iris-T air-defense system, and the U.S. in its latest aid announcement said it would provide two Nasams air-defense systems. Unlike most other heavy weapons supplied by the U.S., the Nasams won’t be drawn down from existing U.S. military stocks but will have to be purchased from the manufacturer, a process that the Pentagon said could take months.

“Regardless of how the war develops on the battlefield, the priority is the defense of the skies,” Mr. Zelensky said. “We count on the arrival in Ukraine of powerful air-defense systems. This is important because it would allow women and children to return home.”

Millions of Ukrainians, mostly women and children, fled the country after Russia invaded in February, and most of them remain abroad because even cities far away from the front lines, such as Kyiv, Odessa and Lviv, are regularly hit by Russian missiles that kill civilians. Some 22 people died in a Russian missile strike that hit a shopping mall in the central city of Kremenchuk last week.

While Ukraine uses a combination Soviet-designed air-defense systems such as the S-300 and Western-provided tactical antiaircraft missiles such as Stingers to keep Russian warplanes from operating deep inside Ukrainian airspace, it is able to shoot down only a part of the long-range cruise missiles that Russia is firing from several hundred miles away.

One of these missiles struck a grains warehouse near Odessa overnight, according to the local administration. In the northeastern city of Kharkiv, a Russian missile strike Wednesday destroyed a university campus.

Near Odessa, a Russian air-to-surface missile Thursday hit an abandoned Moldovan-flagged tanker, Millennial Spirit, in the open sea, the Ukrainian military said. The tanker, which had a small amount of diesel on board, caught fire.

In Donbas, Russian forces continued an assault on Ukrainian defenses near the towns of Slovyansk, Siversk and Bakhmut after consolidating control over the city of Lysychansk, captured last week, according to the Ukrainian military. Ukrainian Himars strikes on Russian ammunition depots in the region sought to undermine that offensive. In Ukrainian-controlled parts of the Donetsk region, which together with the Luhansk region makes up Donbas, seven civilians were killed by Russian shelling in the past 24 hours, according to governor Pavlo Kyrylenko.

While Russia continues to attack Ukrainian positions, it has not announced new territory gains since July 3, when it seized Lysychansk and completed its takeover of the Luhansk region.

The subsequent lack of movement suggests that Russian forces are taking an operational pause, confining troops to relatively small-scale offensive actions, according to a Wednesday evening assessment by the Washington-based Institute for the Study of War. Russia, which has lost significant manpower and weaponry during the Donbas offensive, is likely rebuilding combat power to attempt future assaults, ISW said.

The Russian invasion has triggered a campaign throughout Ukraine to remove references to Russia, such as streets named after Moscow or Russian writers and politicians. In the central Ukrainian town of Pereyaslav, where Ukrainian Cossack leader Bohdan Khmelnytsky pledged allegiance to the Russian czar in 1654, municipal officials Thursday removed a monumental sculpture that commemorated the “eternal” union between Russia and Ukraine.

Even before the removal, the monument’s pedestal was spray-painted with the names of Ukrainian cities where large numbers of civilians died as a result of the Russian invasion: Bucha, Mariupol, Irpin, Kharkiv and Hostomel..