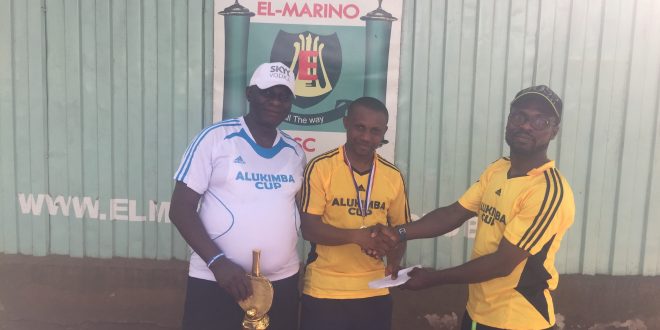 Okere, the defending champion, displayed his dexterity in the tournament by defeating Chris Anazia in the finals.

Like in the 2016 edition, Chris Anazia and Remi Koledoye retained their second and third positions respectively.

The annual tournament which is in its sixth year is usually played between members of the prestigious Lagos based El Marino Sports Club. The tournament is sponsored by Otunba Toyin Odunowo who is also a member of the club.

Otunba Odunowo coincidentally celebrated his 61birthday on the day of the competition.

Speaking on the tournament, the Team Manager of El Marino Sports Club, Otunba Seyi Adefarati, said the tournament is aimed at enhancing skills in the game which is a major sporting activity the world over.

He added that the tournament is also aimed at promoting physical fitness and encouraging skills among members of the club.

Continuing, Otunba Adefarati said “the door of the club is open to new members so that the philosophy of healthy living which El Marino believes in will spread to more Nigerians”.

Also, Otunba Odunowo, said he decided to sponsor the tournament for the interest of sports development among members and for them to be physically fit. He stated that other sporting activities have been given wide recognition and that table tennis is an area that has not been well promoted, hence the sponsorship which is aimed at improving skills in that segment of sport.

On his part, Okere the winner of the tournament said the matches have been very challenging but he knew he would win because he knows the weak points of his opponents. “I have to come up with a different style in the finals, other than what l used in the semi-finals to defeat my opponent to clinch the first position,” he said.

Founded in 2002, El Marino is an elite Sports Club that promotes healthy living through participation in sporting activities.