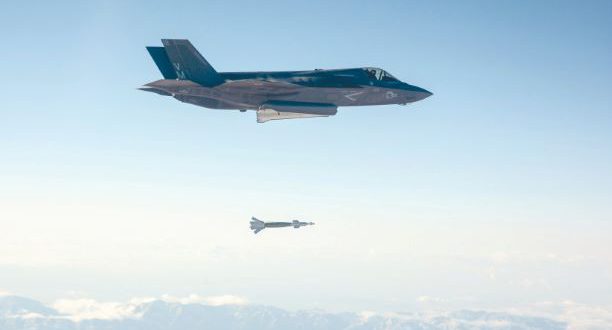 A US Marine Corps F-35B fighter jet drops a laser-guided bomb at Edwards Air Force Base, California. (photo credit: US NAVY VIA REUTERS)

The Gulf ally complained that US security requirements were too onerous, the report said, citing American officials.

The United Arab Emirates is threatening to pull out of a $23 billion deal to buy American-made F-35 aircraft, Reaper drones, and other advanced munitions, The Wall Street Journal reported on Tuesday.
The Gulf ally complained that US security requirements were too onerous, the report said, citing American officials.
F-35 contractor Lockheed Martin Corp, the US State Department and the UAE foreign ministry did not immediately respond to a request for comment.
The UAE signed an agreement with the United States to purchase 50 F-35 jets and up to 18 armed drones, people familiar with the situation told Reuters in January.
A Lockheed Martin F-35 aircraft is seen at the ILA Air Show in Berlin (credit: AXEL SCHMIDT/REUTERS)
The UAE, one of Washington’s closest Middle East allies, had long expressed interest in acquiring the stealthy F-35 jets made by Lockheed Martin, and was promised a chance to buy them in a side deal when it agreed to normalize relations with Israel in August 2020.
On Dec. 4, a UAE defense ministry official said that a deal to purchase French Rafale fighter jets would complement the Gulf country’s planned deal to buy the American-made F-35 warplanes and was not a replacement for them.
Share

Charles Igbinidu is a Public Relations practitioner in Lagos, Nigeria
@https://twitter.com/ionigeria
Previous Revealed: How Israeli technology was used to remove drone threat from the Pope during mass in Slovakia
Next Pfizer says COVID-19 pill near 90% effective in final analysis