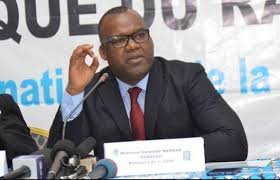 The United States on Friday imposed travel restrictions on five top officials from Democratic Republic of Congo, including the heads of the country’s electoral body and constitutional court, accusing them of corruption during the presidential elections.

Friday’s surprise announcement comes nearly a month after the United States welcomed the constitutional court’s ruling that opposition leader Felix Tshisekedi had won the Dec. 30 vote, despite widespread concerns by the international community over the outcome of the contentious election.

U.S. special envoy for Africa’s Great Lakes region, Peter Pham, is currently in DRC, a State Department officials said, his first visit to the country since his appointment in November.

The restrictions also affect their families.

“These individuals enriched themselves through corruption, or directed or oversaw violence against people exercising their rights of peaceful assembly and freedom of expression,” the State Department said in a statement.

Spread the lovePrime Minister of France, Edouard Philippe, 49, and his government have submitted their …