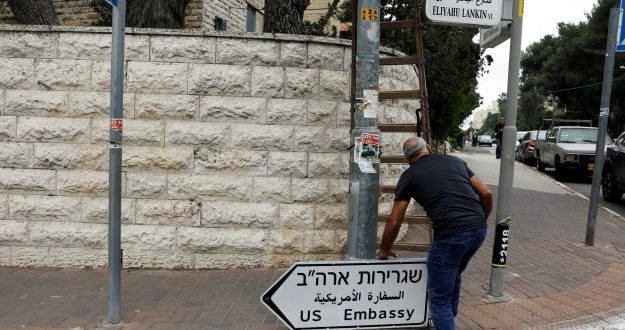 A worker puts on the sign at US Embassy in Jerusalem

Despite opposition and complaints by the Arab World, the United States will open its embassy in Jerusalem on Monday, 14 May.

The Office of the spokesperson for the Department of State said it was proud to announce the dedication and that  Amb. David Friedman would preside over the dedication ceremony.

It added that Deputy Secretary John Sullivan would lead the presidential delegation to the historic opening along with Secretary of Treasury Steven Mnuchin.

“As the President stated on December 6, 2017, the historic opening of our embassy recognizes the reality that Jerusalem is the capital of Israel and the seat of its government.

“Seventy years ago, the United States, under President Harry S. Truman, became the first nation to recognize the State of Israel.

“Moving our Embassy is not a departure from our strong commitment to facilitate a lasting peace deal; rather it is a necessary condition for it.

“We are not taking a position on final status issues, including the specific boundaries of Israeli sovereignty in Jerusalem, nor on the resolution of contested borders,” the department said.

It added that Consulate General Jerusalem would continue to operate as an independent mission with an unchanged mandate responsible for U.S. relations with the Palestinians and the Palestinian Authority.

The department said: “The United States continues to support the status quo with regard to the Haram al-Sharif/Temple Mount.

“The Administration is firmly committed to pursuing a lasting and comprehensive peace between Israel and the Palestinians that promises a brighter future for both”.

While in Jerusalem as the Head of Delegation, Sullivan would also meet with Prime Minister Benjamin Netanyahu, Deputy Minister of Foreign Affairs Tzipi Hotovely, Ministry of Foreign Affairs Director General Yuval Rotem, and members of both U.S. Embassy and Consulate General staff.

The Department would livestream the Dedication Ceremony on www.state.gov and Facebook.com/usdos, it said.

Charles Igbinidu is a Public Relations practitioner in Lagos, Nigeria
@https://twitter.com/ionigeria
Previous I did not call Amaechi, Fashola scavengers: Okonjo-Iweala
Next Nigerian sues United Airlines for removing her from aircraft after white man complained she had ‘pungent’ smell