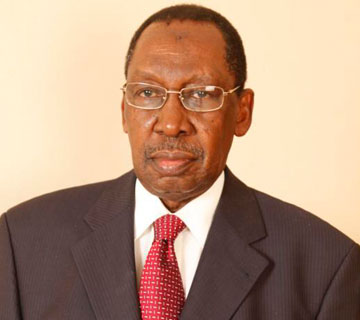 
Ibrahim Uwais, son of former chief justice of Nigeria, was killed in an air strike by US-led coalition forces on a senior ISIS leader in Iraq on May 6, reports TheCable.

Halima, Ibrahim’s wife who travelled with him to Iraq in February 2015, has called to inform her father-in-law, Mohammed, who was Nigeria’s chief justice from 1995 to 2006.

Ibrahim was believed to be in the convoy of Abu Waheeb, a senior ISIS leader dubbed “the emir of Anbar”, at the time of the US airstrike in a town near Rutba in the Anbar desert.

It could not confirm if he was in Waheeb’s convoy or if he happened to be in the vicinity of the US strike.

All in the convoy were killed in the strike, but only the identity of Waheeb had been made public by Pentagon.

Waheeb had been reported killed on several occasions, but Pentagon confirmed that the former member of Al-Qaeda in Iraq who used to appear in ISIS execution videos is now dead.

Ibrahim, 42, left Nigeria early 2015 to join ISIS in a surprise move, because he was said to have openly condemned Boko Haram for the “damage” they were doing to Islam.

He had two wives and four children at the time he left the country.

While his elder wife was the head of a private school in Abuja, the younger worked with the Debt Management Office (DMO).

Before embarking on the trip to Iraq via Turkey, he reportedly told his wives that they were free to return to their parents.

But both of them said they would go with him and they took all their children with them.

When the retired justice was alerted on the disappearance of his son and his family, he became apprehensive and started to make investigations, eventually reporting to the security agencies.

The Turkish embassy in Abuja was compelled to disclose the details of Ibrahim’s movement through a court injunction, and it confirmed issuing visas to Ibrahim and members of his family.

The details of his arrival in Turkey were made available, while images of CCTV recordings were also said to have been analysed by the Turkish security agencies to establish their movement.