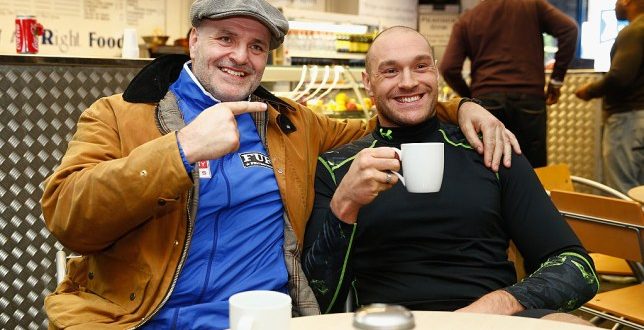 Tyson Fury’s father, John Fury, has revealed that he has told the new WBC champion to retire following his victory over Deontay Wilder – and claims the Gypsy King is considering doing so.

The lineal heavyweight champion dismantled Wilder at the MGM Grand in Las Vegas on Saturday night with a dominant and bruising display of power, with the American’s corner throwing in the towel in the seventh round.

Talk has already turned to a potential unification fight with Anthony Joshua, while Wilder can trigger a trilogy fight, but John Fury is keen for his son to walk away from the sport having achieved greatness.

Speaking on Good Morning Britain on Monday morning, he said: ‘I want my son to retire now. He’s done enough to prove.

‘It’s been an uphill battle for him. He’s done enough. I want him to pack it in now. ‘I think it’s in the back of his mind. He can’t do anymore. Enough is enough. He’s given all.’

Speaking about Fury’s incredible return, he continued: ‘I’ll be honest, I’m sat here today, and I still keep pinching myself because where he was two years ago there was no hope, basically.

‘He was that low, he went that far back, I didn’t think he was ever going to get back.

A light switch just went on and off and here we are today.

‘But I just think myself there’s more to life than we see with the eye, there’s got to be, because he was in such a mess.

‘It was a dark time, when you see a man who was like drinking himself to death to escape reality, and he was eating all kinds of food and a bucket load. And he was doing it in front of you.

When your son stops caring what you think as a father and a parent, that’s time to worry.’