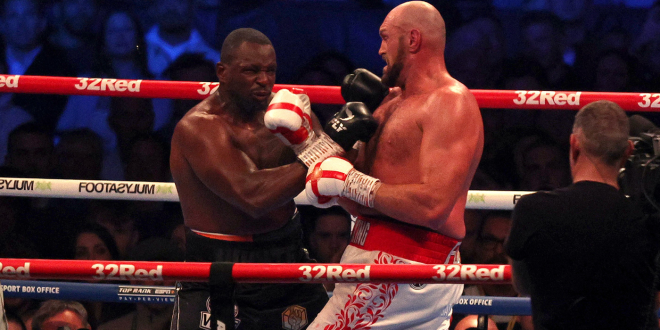 Tyson Fury retained his WBC heavyweight title with a sixth-round TKO of Dillian Whyte on Saturday before 94,000-plus at Wembley Stadium, a right uppercut that sent the challenger crashing to the canvas.

Whyte made it to his feet before the count of 10, but when asked to walk forward by the referee, he stumbled into the ropes and the bout was waved off with one second left in the round.

The 33-year-old was making the second defense of the title he won from Deontay Wilder in 2020 via a seventh-round KO. Fury followed that victory with an 11th-round KO of Wilder in October in ESPN’s Fight of the Year.

“I promised my lovely wife Paris of 14 years that after the Wilder 3 fight that would be it, and I meant it,” Fury said moments after the fight. ” It was a great trilogy and I meant that…

“Tyson Fury proved his greatness once again,” said Arum. “There had never, ever been a heavyweight like ‘The Gypsy King’, and tonight was one of his best performances.”

During a separate postfight interview with ESPN’s Bernardo Osuna, Fury brought current UFC heavyweight champion Francis Ngannou, who was in the ring, over to talk on camera. The two implied they would be setting up a fight in the future. Ngannou said it would be “hybrid rules,” like the two combatants would wear MMA gloves while competing in a boxing ring.

“I want to find out who is the baddest motherf—– on the planet,” Ngannou said.

Fury, too, intimated that this clash would happen. Ngannou is still under contract with the UFC, but his team believes he will become a free agent in January. Ngannou, MMA’s most feared puncher ever, has long expressed an interest in boxing.

“This is gonna be one very special fight,” Fury said. “Like never before seen in the history of our sport. We’re not talking two light guys, 140 pounds. I’m [270], he’s 270 pounds. It’s gonna be an explosive fight when it happens.”

“Definitely sometime next year, 2023, that fight will happen, because by the end of this year we’re gonna sort it out and get settled. Ready to go,” Ngannou told BT Sport. “Tyson Fury vs. Francis Ngannou in Africa, that would be the best one. The Rumble in the Jungle 2.”