Tyson Fury has been refused access to the US over his alleged links to crime boss Daniel Kinahan, it emerged tonight.

It is not known on what day this is thought to have happened.

Addressing claims that Irish boxing promoter Kinahan runs a global organised crime group, Fury previously said: ‘That’s none of my business and I don’t interfere with anybody else’s business.’

Fury, who was photographed in Dubai in February this year with the now US sanctioned Kinahan, said: ‘Because I had my picture taken with a man it doesn’t make me a criminal.

‘I’m just a boxer. There could be a criminal in this building.’

Kinahan has been named as a senior figure in organised crime in Dublin’s High Court, and in April this year, the US Treasury imposed sanctions on him, his father Christy Kinahan and brother Christy Kinahan Jr as well as several associates of the Kinahan family.

The US Department of State also announced the offering of rewards of up to $5 million for information leading to the arrest and/or conviction of the Kinahan family members.

Kinahan has advised Fury in the past, but Fury has not been accused of criminal activity.

On April 12, the United States offered a $5million (£3.8million) reward for help arresting the leaders of Ireland’s Kinahan drug trafficking gang which it likened to some of the world’s most notorious crime networks. 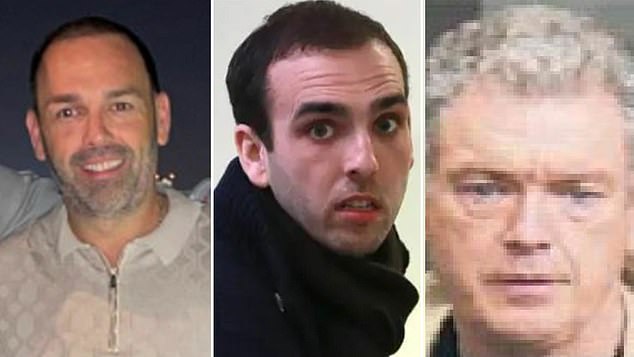 Washington also imposed sanctions against gang leaders whom Irish police said had gone from dealing heroin and cocaine in Dublin in the 1990s to operating across Europe.

The US offered the reward for information that would lead to the ‘financial destruction of the Kinahan gang or the arrest and conviction of its leaders, Christy Kinahan Senior and his sons Daniel and Christopher Junior.

A wide range of criminality by the gang, including more than a dozen murders, is estimated to have generated over £833 million (1 billion euros).

Daniel Kinahan, one of the three leaders named by U.S. authorities, has been involved in organising high-profile boxing fights in recent years.

He was credited by world heavyweight champion Tyson Fury with helping broker a potential unification bout two years ago.

The £3.8 million ($5 million) reward was also offered for information leading to the financial disruption of Daniel Kinahan, whom the Treasury said is believed to run day-to-day operations, his brother Christopher Junior and father Christopher Senior, the gang’s founder and leader.

All three are in the United Arab Emirates, with whom Ireland does not have an extradition treaty. The U.S. Treasury said the group frequently uses Dubai as a hub for illicit activities.

Charles Igbinidu is a Public Relations practitioner in Lagos, Nigeria
@https://twitter.com/ionigeria
Previous Arsenal midfielder Granit Xhaka’s yellow card against Leeds is being investigated by Crime Agency amid suspicions of a major betting scandal
Next Bandits attack Churches in Kaduna, Gun Down Three