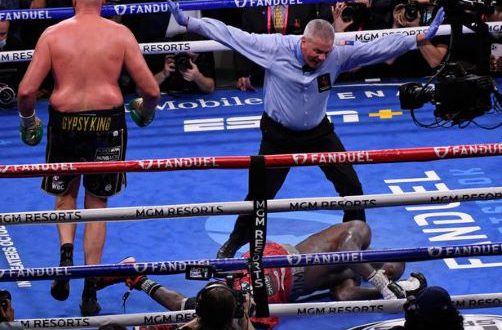 Tyson Fury won the fight in the eleventh round ( Image: Getty Images)

Tyson Fury and Deontay Wilder have both passed their final drug tests following their third and final heavyweight clash.

Fury put a concussive end to their three-year rivalry by stopping Wilder in the penultimate round in Las Vegas earlier this month.

And the Voluntary Anti-Doping Ageny (VADA) has confirmed both fighters’ final samples came back clean.

“Congratulations to Tyson Fury and [Deontay Wilder] for again successfully completing VADA testing,” read a tweet from the organisation.

Fury dropped Wilder in the third round of their trilogy bout before being twice dropped himself in the next session.

He recovered to dominate the remainder of the bout however, dropping Wilder again in the 10th round before stopping him minutes later to retain his world title.

Fury is now set to take on British rival Dillian Whyte who has withdrawn from his proposed clash with Otto Wallin with a shoulder injury.

Fury and Wilder fought to a draw in 2018 with the Brit twice recovering from being dropped only to be denied victory by the judges.

The pair renewed their rivalry 15 months later when Fury, with new trainer SugarHill Steward in his corner, stopped Wilder in the seventh round.

It was the American’s turn to change coach for the trilogy fight with former opponent Malik Scott taking over.

But the final instalment of their rivalry was delayed by over a year due to first the coronavirus pandemic and then Fury’s pursuit of an undisputed fight with Anthony Joshua.

Wilder was able to secure a shot at his old title after taking his case for a rematch to arbitration, but he was unable to avenge his previous defeat.

He now faces an uncertain future having broken a finger in his hand during his second career defeat.

But he could be in line for a clash with Joshua should the Brit fail to avenge his own revenge mission against Oleksandr Usyk net spring.

Joshua was outpointed by the Ukrainian as he lost his world titles for the second time in three years.

And should he lose for the second successive time, he could resurrect talks with Wilder over a fight which had been mooted while both men ruled the division.

Fury, meanwhile, is in no rush to make a decision on his move, but is expected to be ordered by the WBC to defend his title against Whyte.

That fight could also take place next March or April with Cardiff’s Principality Stadium among the potential venues.

Charles Igbinidu is a Public Relations practitioner in Lagos, Nigeria
@https://twitter.com/ionigeria
Previous There is no ‘insecurity’ in Nigeria
Next Man Utd misfortune could end up benefitting Paul Pogba with Liverpool tactical switch