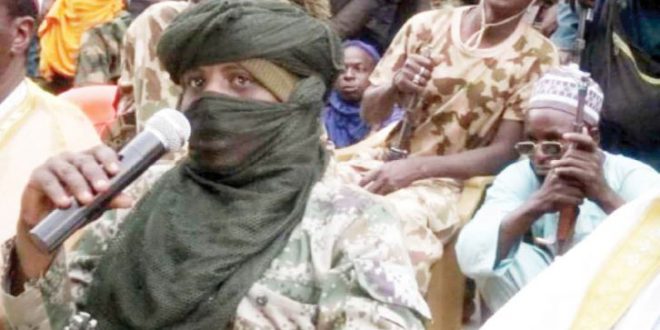 Kachalla Turji (with mic) is one of the most notorious bandits

Two Zamfara Banditry Kingpins, Many Others Killed In Rival Clash

Two notorious bandits in the Shinkafi Local Government Area of Zamfara State, Dullu and Dan Maigari, have been killed alongside at least 15 others during an attack on their base by another notorious bandit, Bello Turji.

The Tuesday morning clash was the bloodiest encounter between the two sides who have been locked in a long rivalry.

The clash followed the killing of a member of the gang of a bandit kingpin on Turji’s side, Na-Sanda.

According to Daily Trust Turji mobilised his loyal fighters and launched an unexpected attack on the Maniya hideouts of the rival gang where they killed some of the gang’s members including Dullu himself and Dan Maigari, who is a younger brother of Bashari Maniya – a noted bandit turned intermediary.

A source from a nearby Dangondi village said many gunmen from Maniya were seen crossing the Moriki-Shinkafi Road into Sububu Forest, escaping from the onslaught.

“Turji also abducted some men from the area but we heard he later killed them. Dullu’s corpse and some others have been abandoned at his own base.

“Turji himself is believed to have lost some men but we are not sure how many. But I have seen some of them returning with bullet wounds,” he said.

The spokesman of the Zamfara Police Command, SP Shehu Mohammed, did not answer phone calls and a text message seeking his comment on the story.

Meanwhile, bandits on Monday reportedly killed no fewer than 30 members of the local vigilante otherwise known as Yan Sakai in a gunfight near Gidan Dan Inna community in Auki district, Bungudu LGA of Zamfara State.

Residents said the armed men had earlier invaded Gidan Inna village and some other neighbouring communities, rustled some cattle and killed some residents.

“Shortly afterward, the leaders of the local vigilantes otherwise known as Yan Sakai from at least 10 neighbouring communities started mobilising their members to chase and recover the rustled cattle from the criminals.

“Within half an hour, the vigilantes mobilised themselves and gave the rustlers a hot chase on motorbikes. However, when the armed bandits realised that they were being pursued, they divided themselves into two; one group herded the stolen animals into the bush.

“The other group then laid ambush for approaching vigilantes. They killed more than 30 on the spot largely because the criminals were more in number,” said a resident, Umar Kadowa.

A witness said he saw the vigilantes on dozens of motorcycles ride towards Gidan Dan Inna village while on his way to his farm.

He said, “I sensed trouble and had to come back home immediately. The remains of the slain vigilantes who were from more than 10 communities were later retrieved for burial at their respective villages.

The spokesman of the state police command, SP Muhammad Shehu, could not be reached for comments.

He had yet to respond to calls and a text message sent to him by our correspondent at the time of this report.