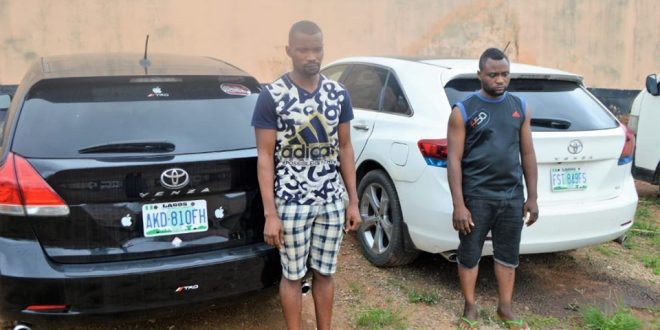 Two suspected internet fraudsters popularly known as yahoo boys, have been arrested by the Economic and Financial Crimes Commission (EFCC).

The suspects identified as Akeju Crown Babatunde, 31, and Agbanah Toba, 35, were arrested over their alleged involvement in internet fraud. The anti-graft was able to establish enough ground for prosecuting the suspects after retrieving data and documents from them.

The statement reads in part;

Akeju, for instance, was found of mining information from online sites, and was in possession of personal information and addresses of several Americans who have fallen victim to his fraudulent acts at different times.

The suspect usually operated with two email accounts – one personal and one other supposedly official – to penetrate his victims and dispossess them of their hard-earned money.

EFCC’s investigations also established Akeju’s deployment of fake identity to engage foreigners in romantic affairs with the intention to defraud them.

Findings revealed various lodgments from his foreign victims into his Nigerian bank accounts.

Agbanah’s case is not too different. He had admitted in his confessional statement with the Commission to be falsely representing himself as one Chris Dan, a 40-year-old Briton, working with the United Nations.

He confessed to have used the white man’s picture to lure his victims into romantic relationships and thereafter solicit for money from them allegedly to enable him to pay for his flight ticket to pay them scheduled visits. After much familiarization, he would then device other tricks to swindle them the more.

The two suspects are still helping the Commission with relevant information for further investigations into activities of their other partners.