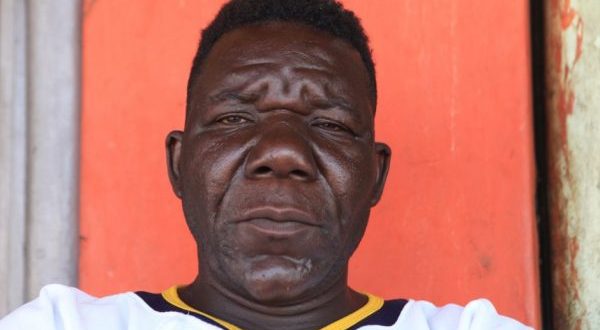 Two-Time Most Ugly Man In Zimbabwe, Reclaims His Title

43-year-old William Masvinu landed his third Mr Ugly contest crown on Sunday night at Ruwa-based Mtangaz Hideout.
Masvinu, who was victorious in the same contest in 2012 and 2013, was adjudged to be “naturally” uglier than four other contestants. Masvinu, with 98 points on the board, beat Fanuel Musekiwa, 61, into second place.

Musekiwa had scored four points less than Masvinu. The 2015 winner of the contest, Mison Sere, could only land third place after netting 91 points. In 2015, Masvinu refused to concede defeat to Sere and blasted the adjudicators for crowning a winner whose ugliness was based on missing teeth.

“It was a tight competition since all the contestants were potential winners. Last time, complacency cost me a lot but this time I came well prepared for the contest and I am happy I have reclaimed my trophy,” Masvinu said, after reclaiming his title.

“I am proud of my ugliness as I was born ugly.” Winning the Mr Ugly contest entitled Masvinu to an ox but he opted to be given $500 cash instead. Second-placed Musekiwa pocketed $200 with Sere taking home $100.