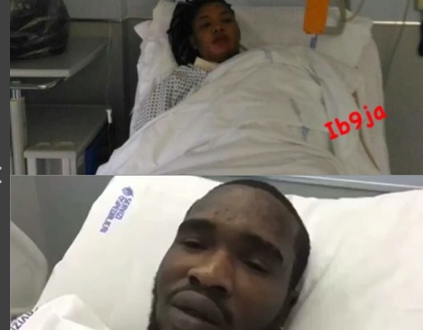 Two Nigerians, Jennifer, 29, and Gideon, 25, were among the six African migrants shot by a gunman, who went on shooting spree in Macerata on Saturday.

Both are now receiving treatment at a hospital in the city. The attack came a day after a Nigerian drug dealer was arrested for killing an Italian teenager and cutting her into pieces.

Hospital officials said Jennifer suffered a fracture to her humerus bone in her arm and was operated upon on Sunday.

Jennifer is still wondering why the gunman, identified as a rightwing extremist, Luca Traini, hit her. “I never hurt anyone. I was talking and laughing with three other people when I was struck by the bullet,” she said.

Her boyfriend told La Repubblica they were waiting at a bus station when he saw a man pointing something at them from a car. Ogie Igbinowania said, “I gave Jennifer a push to get her out of the way and threw myself down. And I heard a shot: Boom.”

Gideon also told Le Stampa that he had always considered Macerata a safe city. He still wondered how he managed to survive the gunshot. “I thought I would die.

I would ask only two things: why he did it and what he has against me,” he said. “Those who do something bad must be afraid, not those who behave well. In three years I have never had any problems with anyone, either with Italians or with other foreigners.

I worked in a supermarket and now I’m looking for a new job. I’m someone who minds my business. I do not get into trouble. I never imagined I could find myself in this situation. Now I do not know if I’ll manage not to feel in danger.”

Luca Traini randomly attacked African migrants, in an attack that has been confirmed to be racially motivated