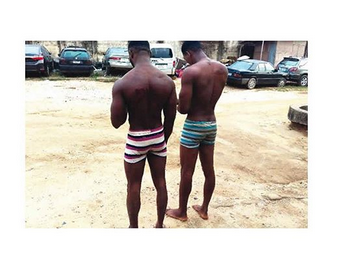 The Cross River State police command has arrested two youths who broke into the home of a medical doctor to avenge several instances of sexual harassment in Calabar.

Sam Williams, 26, is a Computer Science graduate from the North America University in Benin Republic, while Archibong Ita, 25, is a student at the University of Calabar.

They were caught by the police at 7am on Monday in the doctor’s residence located along Lemna Road, with a machete and change-over switches, after tying the security guard.

Speaking on the issue, Williams said: “This is the first time I got involved in this kind of thing. I know the medical doctor. He has sexually harassed me a couple of times. I have stopped practising homosexuality, but he kept harassing me.

He had his way; so, I had to stay away from him because I knew what he stood for. We did not really go there as armed robbers. We had wanted to teach him a bitter lesson. I feel justified for what I had gone there to do. Although I regret this move now that I was caught,” he said.

On his part, Ita said, “I have worked for this medical doctor for a while; we worked for him. He has been maltreating his boys. The last time we brought some boys to him, he maltreated them.

He kept harassing them with sex. He has done it to so many others. The same doctor has done the same thing to us. So, our move was to punish him for what he paid for.”