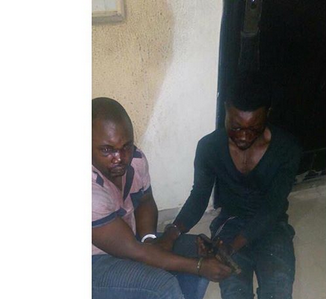 Two Kidnappers Nabbed In Ajah, Lagos, While Escaping With Their Victim

The Nigeria Police, Lagos State Command, arrested two notorious Kidnappers, yesterday, 10th of January, 2018, at about 9:43pm, at Elemoro, Ajah.
The criminals met their waterloo while escaping with their victim, one Mrs Mildred Mbajiorgu.

The tight security network emplaced in Lagos state by the Command Commissioner of Police, CP. Edgal Imohimi, did the magic as the Divisional Police Officer, Elemoro tapped into it to get the suspects arrested.

According to the DPO, SP Mohammed Shehu Limawa, he received a distress call from a lady who told him that she heard the voice of a woman crying for help in a dark blue Gulf 3 car.

She also gave the registration number of the car as KRD 845 EC. The DPO quickly alerted one of the Anti crime patrol teams along the route taken by the Kidnappers and instructed the policemen to slow down traffic to about 20km per hour.

The hoodlums ran into the gridlock and were arrested by the policemen who were in the waiting for them. The victim was rescued and taken to the hospital to treat the injury inflicted on her forehead by the dare devils using the butt of a locally made pistol.

Meanwhile the suspects by names, Igwe Sunday, age 28years and Chukwuemeka Bright, 21 years together with the locally made pistol recovered from them has been handed over to the operatives of the Special Anti Robbery Squad (SARS) for further investigation.