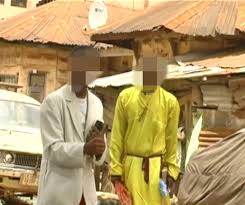 The Ondo State Commandant of the NSCDC, Pedro Awili Idebo, told journalists that the duo, Dada Babaroti and Clement Olatunde Fabeku, had been extorting unsuspecting worshipers by using “diabolical and fetish” means.

He said Fabeku operates the Truth and Life Bible Church located in Ilorin, the Kwara State capital, while Babaroti is the General Overseer of the Blood of Jesus Christ, in Idanre area of Ondo State.

He stated that men of the command moved into action and arrested the suspects after some worshipers cried out after falling victim. Mr. Idebo stated that some fetish items used in swindling the victims were recovered from the two suspects.