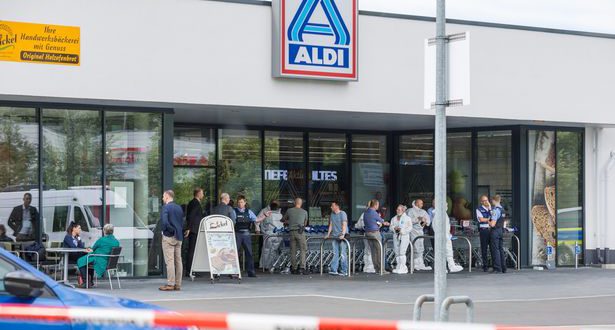 Shoppers at the Aldi store in Germany did not realise at first the murder had taken place and thought the gunshot was someone breaking glass at the shopfront, before spotting a murdered 53-year-old woman

Two people have been found dead after a gunman opened fire at an Aldi store in central Germany on Tuesday.

The murderer stormed the supermarket at around 1 pm local time in Schwalmstadt-Treysa, a town of around 8,500 people northeast of Germany’s financial capital Frankfurt.

Germany has some of the strictest gun laws in Europe and one of the lowest gun-related death rates.

You must be at least 18-years-old to apply for a license and also undergo a reliability check, which is where criminal records are checked, there are checks to see if the person is an alcohol or drug addict and whether they have a mental illness.

Anyone under 25 in Germany also has to pass a psychiatric exam before applying for a gun licence.

However, on May 19, a suspect armed with a crossbow went on a shooting rampage at the Lloyd High School in the northern city of Bremerhaven, leaving one injured.

German police are currently on-site and say there is no further danger to the population.

A police spokesperson said: “The background to the crime is currently unknown. The police are on site with strong forces. There is no danger to the population.”

According to reports, eyewitnesses said a man followed a woman inside the store. She then screamed for help before the gunman shot her and turned the gun on himself, taking his own life.

According to reports, eyewitnesses said a man followed a woman inside the store ( Image: Karsten Socher / BILD)

According to current police knowledge, no other people were injured apart from the two victims who have been identified as a 53-year-old woman and a 58-year-old man, HNA Newspaper reports.

A witness says many customers did not realise what happened at first, as it sounded like a glass had broken.

There are around seven police cars and two ambulances parked in front of the building, while employees and witnesses are being looked after in a nearby cafe.