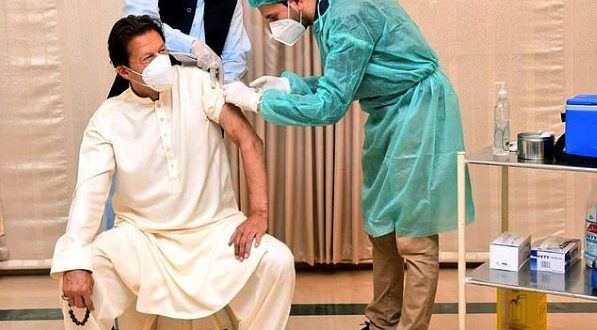 Pakistan’s Prime Minister Imran Khan has tested positive for Covid-19, his office said on Saturday, just two days after he was vaccinated against the disease.

The diagnosis comes as the country grapples with a deadly third wave of a virus that has already killed nearly 13,800 people from more than 620,000 infections – although limited testing suggests real figures are likely much higher.

Khan was suffering from a mild cough and a mild fever, his spokesman Shahbaz Gill later added, saying the positive test was performed on Saturday.

His aides were quick to put distance between the diagnosis and his first jab of the two-dose vaccine.

‘Please do not link it to the corona vaccine. Immunity develops a few weeks after the vaccine is given. Make sure to vaccinate your elders and loved ones. Be careful,’ Gill added.

Khan was probably infected before he got the vaccine shot, during a series of public engagements this week, information minister Shibli Faraz told the Geo News television channel.

Khan is ‘self-isolating at home,’ said minister Faisal Sultan in a tweet, without giving further details as to whether other people who have been in contact with Khan would also be isolating.

The 68-year-old received a shot of the Chinese-produced Sinopharm vaccine on Thursday – one of over a million doses donated to Pakistan by Beijing.

Charles Igbinidu is a Public Relations practitioner in Lagos, Nigeria
@https://twitter.com/ionigeria
Previous I won’t support Jonathan in 2023 if he runs in APC , says Wike
Next UFC fighter FAINTS TWICE on the scales at weigh-in after weight cut