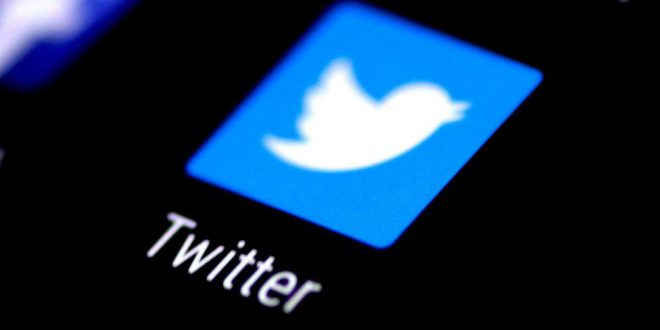 A former Twitter employee was found guilty of spying for Saudi Arabia and releasing private user information of those who publicly criticized the country in exchange for large sums of money.

Ahmad Abouammo, 44, used his position as an engineer at Twitter to access confidential data about users, their email addresses, phone numbers and IP addresses that can disclose their location, prosecutors claimed.

He then passed that information on to an official linked to the Saudi royal family in exchange for a luxury watch and hundreds of thousands of dollars.

An 11-person jury found Abouammo guilty of being an illegal agent of a foreign government, money laundering, falsification of records and one count of wire fraud on Tuesday. He was found innocent on five other counts of wire fraud.

Abouammo remained free on Tuesday pending sentencing, despite concerns expressed by prosecutors that he might try to flee the country. He is scheduled to return to court Wednesday for a hearing.

The case marked the first time the kingdom, long linked to the US through its massive oil reserves and regional security arrangements, has been accused of spying in America.

Former Twitter employee Ahmad Abouammo was found guilty of spying for Saudi Arabia and releasing private user information of those who publicly criticized the country in exchange for large sums of money. He is pictured leaving Santa Rita jail in Dublin, California in Nov. 2019

Abouammo, a dual US and Lebanese citizen, worked for the social media platform from 2013 to 2015. He managed media partnerships with high-profile users in the Middle East and North Africa.

Prosecutors claimed the father-of-three was recruited into the spying scheme in 2014 by Bader Al-Asaker – also known as Bader Binasaker – an aide to then-Saudi Crown Prince Mohammed bin Salman.

In December, approximately six months later, Abouammo met with Al-Asaker in London while on a work trip. After the trip he flew back to the US with a watch valued at more than $40,000, investigators claimed.

‘That luxury watch—it was not free,’ prosecutor Eric Cheng said during closing arguments last week. ‘The kingdom had now secured its Twitter insider.’ 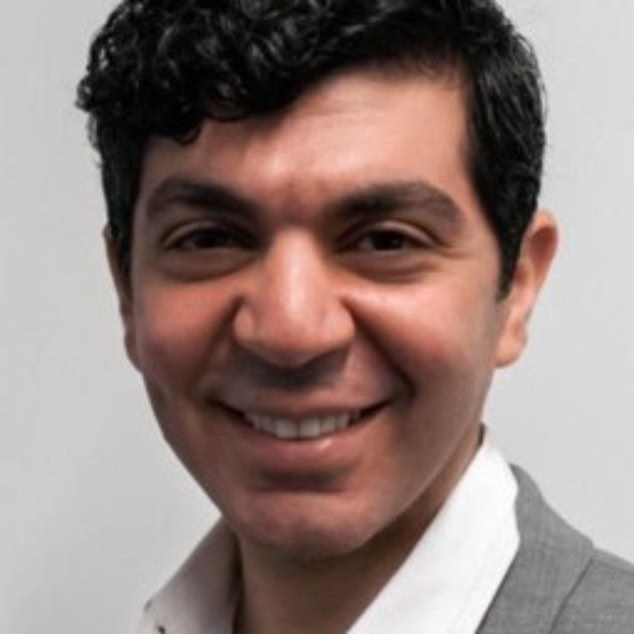 Ahmad Abouammo, 44, was accused of using his position as an engineer at Twitter to access confidential data about users, their email addresses, phone numbers and IP addresses that can disclose their location 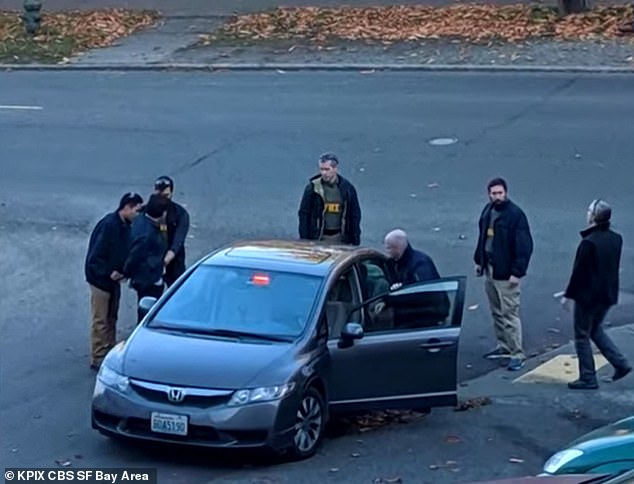 Abouammo was arrested in November 2019 and charged with 11 counts, including spying. He had pleaded not guilty to the charges and was released from jail on bond

Cheng also argued that Abouammo took bribes of amounts close to triple his annual salary for almost a year:

‘They paid for a mole,’ he argued. ‘We all know that that kind of money is not for nothing.’

‘The evidence shows that, for a price and thinking no one was watching, the defendant sold his position to an insider of the crown prince,’ US prosecutor Colin Sampson echoed in his final remarks to the jury.

Defense attorney Angela Chuang countered that while there certainly appeared to be a conspiracy to get revealing information about Saudi critics from Twitter, prosecutors failed to prove Abouammo was part of it.

She argued that her client was doing his job while employed at Twitter and that the US ‘government hadn’t proven beyond a reasonable doubt’ that Abouammo was acting as a spy for Saudi Arabia. 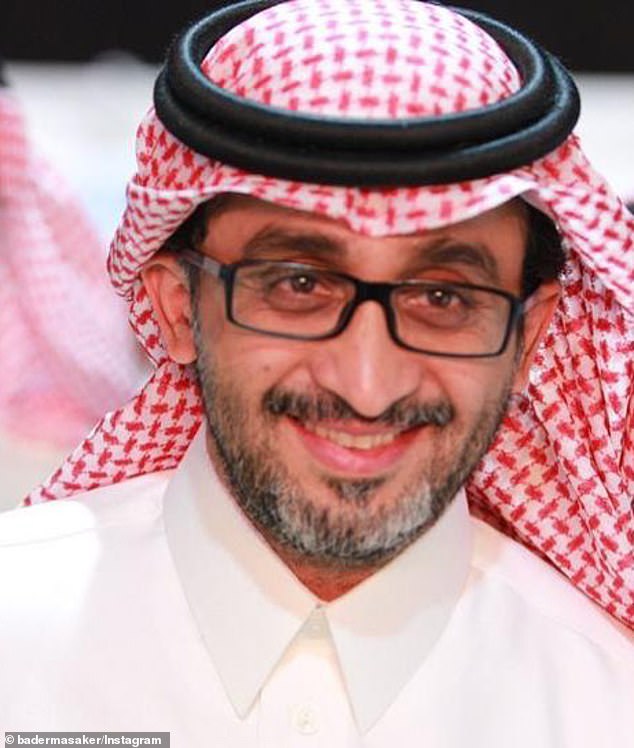 Abouammo was recruited into the spying scheme in 2014 by Bader Al-Asaker (pictured), an aide to then-Saudi Crown Prince Mohammed bin Salman 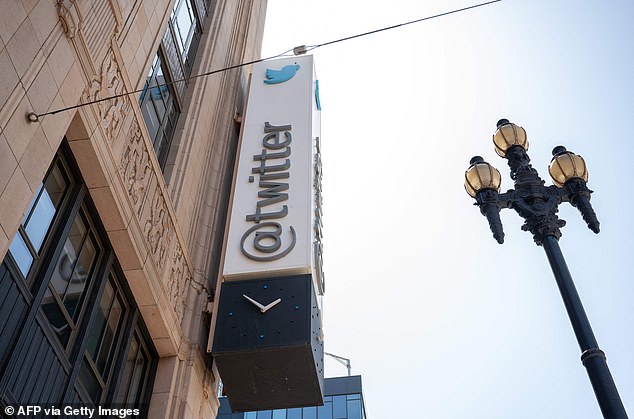 The prosecution, however, pointed out that Abouammo received multiple payments of $100,000 each into a bank account in Lebanon that was created under his father’s name. He then made wire transfers of $10,000 to a US account.

He also failed to report the watch or monetary payments to Twitter, violating company policy requiring workers to disclose any offerings worth more than $100.

Chuang agreed Abouammo should have reported Al-Asaker’s gifts to his then-employer, but argued that ‘misstep wasn’t enough to convict him.’

‘We just spent the last two weeks in a glorified HR investigation,’ she told the court, adding that it was ‘important to make the distinction between breaking federal law and violating workplace policies.’

Additionally, prosecutors alleged Abouammo had recruited his Twitter colleague, Ali Alzabarah, into the scheme and introduced him to Al-Asaker. 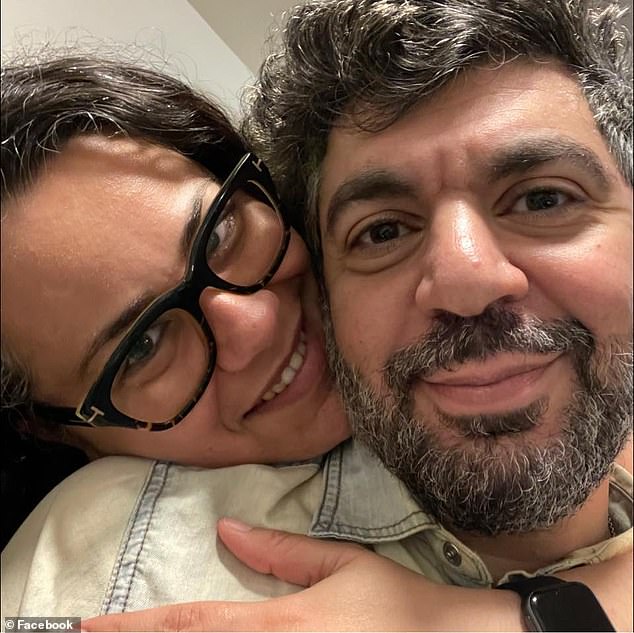 Ahmad Abouammo and wife Zeina Elassi-Abouammo are shown on her Facebook page in a photo posted June 22, 2022 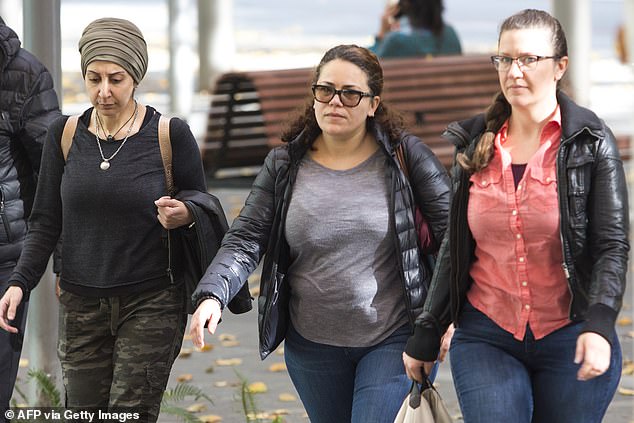 Zeina Abouammo, second left, whose husband, US citizen Ahmad Abouammo, is accused of using his position at Twitter to spy on accounts, arrives for a detention hearing at US District Court, Western District of Washington in Seattle on November 8, 2019

Alzabarah, who worked in website maintenance, allegedly used his employee credentials to access email addresses, birth dates and other information about Twitter users who made posts criticizing the Saudi royal family.

Officials believe he provided the Saudi government with the personal information of more than 6,000 users in 2015, including at least 33 usernames for which Saudi law enforcement had submitted emergency disclosure requests to Twitter.

When Twitter asked Alzabarah why he was accessing the user data, he fled the country and submitted his resignation letter via email why traveling to Saudi Arabia.

Alzabarah and another man, Ahmed Almutairi, where both charged by the US Justice Department for their roles in the scheme. Alzabarah, a Saudi national, is being sought on a charge of failing to register in the US as an agent of a foreign government as required by federal law, according to an FBI statement.

Chuang contended in court that prosecutors were trying to punish Abouammo for Alzabarah’s actions.

‘As much as the government wishes that was Mr. Alzabarah sitting at the table right now, it is not,’ Chuang told jurors. ‘And that is on them, they let Mr. Alzabarah flee the country while he was under FBI surveillance.’

Almutairi is also believed to have returned to Saudi Arabia. The FBI has issued arrest warrants for both men. 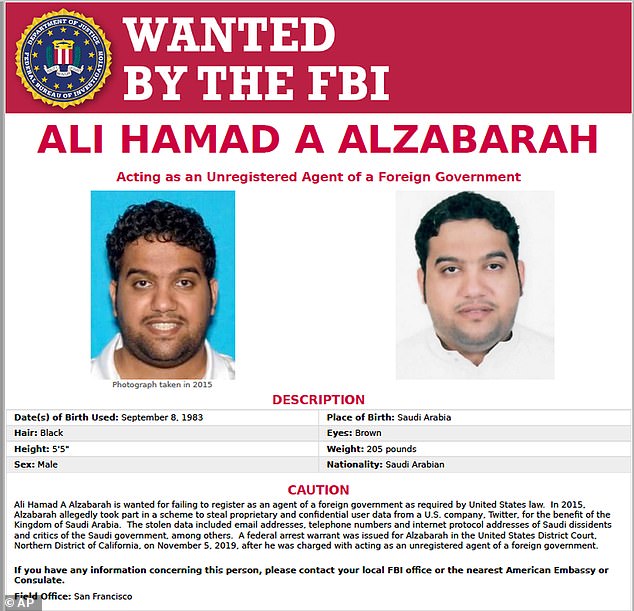 Additionally, prosecutors alleged Abouammo had recruited his Twitter colleague, Ali Alzabarah (pictured), into the scheme and introduced him to Al-Asaker 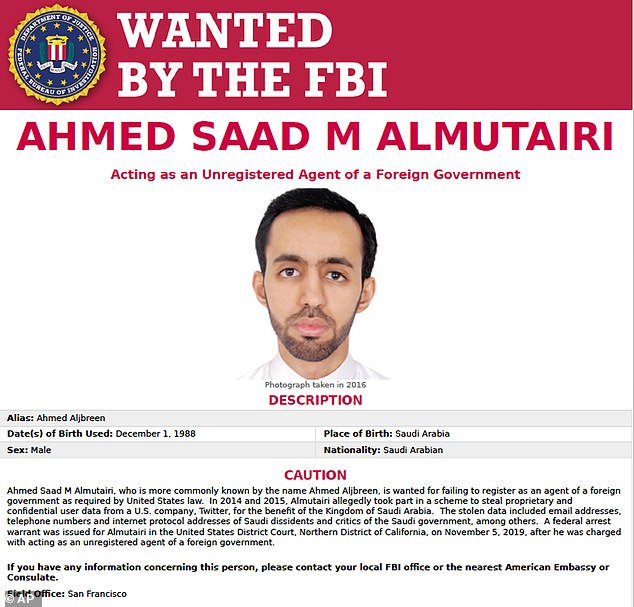 Alzabarah and another man, Ahmed Almutairi (pictured), were both charged by the Justice Department with acting as illegal agents of a foreign government for their roles in the scheme

Abouammo was first interviewed by the FBI at his Seattle home in 2018. He was working as a social media consultant at the time after having been employed at Amazon for nearly three years.

Agents claim he ‘lied’ about his involvement with the scheme during the interview and provided them with a ‘fake invoice’ he had created ‘just moments before.’

He was arrested in November 2019 and charged with 11 counts, including spying. He had pleaded not guilty to the charges and was released from jail on bond.

His trial, which was held this summer, lasted about two weeks and featured testimony from current and former Twitter employees, FBI investigators and the defendant’s sister. Abouammo did not testify in his trial.

His friends and family wrote letters depicting him as a ‘loyal and responsible family man’ who provided support to his niece when she needed surgery.

It took the jury nearly three days to come to the consensus that Abouammo was guilty of spying, jurors disclosed after reading their verdict.

Charles Igbinidu is a Public Relations practitioner in Lagos, Nigeria
@https://twitter.com/ionigeria
Previous Ryan Giggs ‘promised me kids & demanded sex all the time – but was dating EIGHT women behind my back’, says ex
Next Man Utd’s incredible decline under Glazers revealed with staggeringly slow growth compared to rivals on the stock exchange