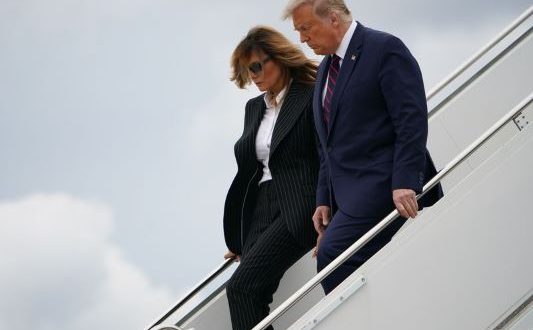 By Lisa Du and Sybilla Gross

Covid-19 has been especially risky for men, the elderly and those who are overweight, raising the danger level for U.S. President Donald Trump.

The positive diagnosis for the world’s most powerful man and First Lady Melania Trump threw a new wrench into the gears of an already chaotic U.S. presidential election that many see as a referendum on his handling of the virus. Trump has been dismissive of preventive measures such as mask-wearing, increasing the possibility of further transmission in Washington.

Trump turned 74 in June. For people who have Covid, the risk of hospitalization and death rises with age. People between ages 65 and 74 are five times more likely to be hospitalized and 90 times more likely to die, compared with patients between 18 and 29, according to the Centers for Disease Control and Prevention.

Melania Trump, who is 50, would be considered lower-risk than her husband. Men have accounted for 54% of Covid-19 deaths in the U.S. between Feb. 1 and Sept. 26, according to the CDC. And among the women who have died, nearly 84% have been older than 65.

Trump’s body-mass index, a measure based on height and weight that doctors use to measure body fat, also creates potential hazards. At the time of his annual physical exam in June, the president stood 6-foot-3 and 244 pounds, giving him a BMI of 30.5. A figure of 30 or greater is considered obese.

It’s not clear whether Trump has any symptoms. Why some coronavirus cases become serious and others remain mild is a question that continues to baffle doctors and researchers. A majority of the world’s cases are categorized as mild.

“Covid’s like playing Russian roulette,” said Brian Oliver, an expert in respiratory diseases at the University of Technology Sydney. “It can affect anyone really badly, but we know that when people are older and when they’ve got more pre-existing co-morbidities, the chances of being affected and having a more severe reaction are much worse.”

Though experts caution that the relationship between obesity and Covid mortality isn’t well understood, one meta-analysis of global data published in August suggested that obese people were 48% more likely to die from Covid-19, compared with people with BMIs in the normal range. Among nearly 17,000 patients hospitalized for coronavirus in the U.S., some 77% were obese, according to a separate study.

Trump will, of course, have access to top-flight medical monitoring and care, and with an annual salary that puts him in the top tier of Americans, he belongs to a demographic group that’s fared relatively well during the pandemic. The U.S. has reported about 7.3 million Covid cases, with roughly 208,000 deaths, the most of any country.

The president also doesn’t drink or smoke, which should improve his general health. Risk of serious illness or death grows sharply in older patients with pre-existing conditions such as heart disease or cancer.

Other world leaders who’ve caught the virus have had differing experiences. Brazilian President Jair Bolsonaro had only a mild illness in the summer.

British Prime Minister Boris Johnson, 56, became seriously ill and required treatment in intensive care after testing positive in March. Johnson was taken to the hospital after failing to shake off a cough and fever he had experienced for 10 days and was put into intensive care the following day.

Johnson spent about a month away from his duties at the peak of the U.K.’s outbreak. Following reports of concern among his Conservative Party colleagues that he has still not fully recovered, the prime minister said this week that he is fitter than a “butcher’s dog.”

Treatment options are better now than they were last spring, when hospitals across Europe and the U.S. were flooded with Covid patients. A few therapies such as the anti-inflammatory dexamethasone and the antiviral remdesivir have been shown to benefit patients, and doctors have a better sense of when to use ventilators — or when to refrain from doing so.