President Trump is using the power of his office to try to reverse the results of the election, orchestrating a far-reaching pressure campaign to persuade Republican officials in Michigan, Georgia and elsewhere to overturn the will of voters in what critics decried Thursday as an unprecedented subversion of democracy.

After courts rejected the Trump campaign’s baseless allegations of widespread voter fraud, the president is now trying to remain in power with a wholesale assault on the integrity of the vote by spreading misinformation and trying to persuade loyal Republicans to manipulate the electoral system on his behalf.

In an extraordinary news conference Thursday at the Republican National Committee headquarters, Trump’s attorneys claimed without evidence there was a centralized conspiracy with roots in Venezuela to rig the U.S. presidential election. They alleged voter fraud in Atlanta, Detroit, Milwaukee, Philadelphia and other cities whose municipal governments are controlled by Democrats and where President-elect Joe Biden won by large margins.

“We cannot allow these crooks — ’cause that’s what they are — to steal an election from the American people,” said one of the attorneys, Rudolph W. Giuliani. “They elected Donald Trump; they didn’t elect Joe Biden. Joe Biden is in the lead because of the fraudulent ballots, the illegal ballots that were produced and that were allowed to be used after the election was over. Give us an opportunity to prove it in court and we will.”

Neither Giuliani nor other Trump attorneys have furnished evidence to support that or any other claim of widespread fraud.

Charles Igbinidu is a Public Relations practitioner in Lagos, Nigeria
@https://twitter.com/ionigeria
Previous Desmond ‘Idiot’ does not stand for anything- Seun Kuti
Next Revealed: How youngest wife of Dubai ruler paid her British bodyguard lover £1.2 million to keep quiet about their affair 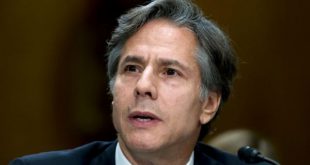 Spread the love US President-elect Joe Biden has selected Antony Blinken, one of his closest …