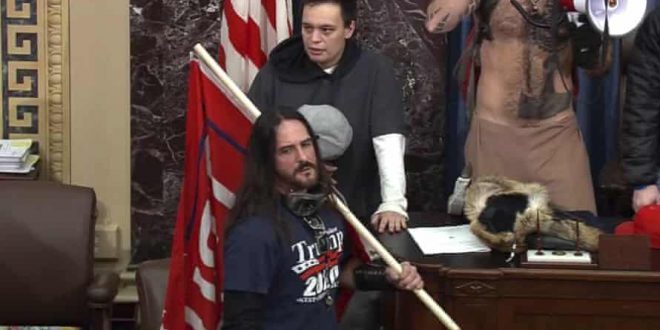 Hodgkins pictured during the riot. Prosecutors pushed for 18 months, although they said he deserved some leniency for pleading guilty to the obstruction charge. Photograph: AP

A Florida man was sentenced on Monday to eight months in prison for his role in the 6 January insurrection in Washington, a punishment likely to set a benchmark for later cases.

Paul Hodgkins, from Tampa, pleaded guilty to obstructing an official proceeding after he breached the US Senate chamber during the attack on the US Capitol.

Hodgkins was filmed wearing a Trump 2020 T-shirt, with a flag over his shoulder and eye goggles around his neck, and seen taking a selfie with a self-described “shaman” in a horned helmet and other rioters on the dais behind him.

He is the first rioter to be sentenced for a felony crime in connection with the attack, which saw hundreds of Trump supporters storm the Capitol after they were fed lies about election fraud causing Trump’s defeat by Joe Biden.

More than 570 people have been charged with taking part in the riot, during and after which five people died.

Prosecutors had asked for Hodgkins to serve 18 months, saying in a court filing he “like each rioter contributed to the collective threat to democracy” by forcing lawmakers to temporarily abandon their certification of Biden’s victory and to scramble for shelter.

Speaking in court in Washington on Monday, Hodgkins apologised and said he was ashamed of his behavior.

Reading from a prepared text, he described being caught up in euphoria as he walked through Washington, then followed a crowd of hundreds up Capitol Hill and into the Capitol building itself.

“If I had any idea that the protest … would escalate [the way] it did … I would never have ventured farther than the sidewalk of Pennsylvania Avenue,” Hodgkins told the US district judge Randolph Moss.

He added: “This was a foolish decision on my part.”

Moss said Hodgkins had “actively and intentionally” participated in an attack that threatened “democracy itself”, BuzzFeed reported. Moss also said Americans needed to be aware that assaulting the Capitol “will have severe consequences”.

“The court here had to consider both what I think are the extremely damaging events that occurred that day but also who Mr Hodgkins is as an individual,” Moss said. “And as I think is reflected by the sentencing I imposed, I tried to strike that balance.”

Hodgkins’ sentence could influence other defendants as they decide whether to accept plea deals or go to trial. He and others are accused of serious crimes but were not indicted, as others were, for roles in larger conspiracies.

A lawyer for Hodgkins had asked Moss not to impose a prison sentence, saying the shame that would attach to Hodgkins for the rest of his life should be factored in.

“Whatever punishment this court may provide will pale in comparison to the scarlet letter Mr Hodgkins will wear for the rest of his life,” Patrick N Leduc wrote in a court filing, citing a Nathaniel Hawthorne novel in which a woman accused of adultery is forced to wear a letter A.

The filing argued that Hodgkins’ conduct was not markedly different from those of Anna Morgan Lloyd, other than stepping on to the Senate floor. Lloyd, 49 and from Indiana, was the first of roughly 500 arrested to be sentenced. She pleaded guilty to misdemeanor disorderly conduct and last month was sentenced to three years probation.

Hodgkins was not accused of assaulting anyone or damaging property. Prosecutors said he deserves some leniency for taking responsibility almost immediately and pleading guilty to obstruction, which carries a maximum 20-year prison sentence.

But they also noted how he boarded a bus in his hometown of Tampa bound for a Trump rally carrying rope, protective goggles and latex gloves in a backpack – saying that showed he came to Washington prepared for violence.

On 6 January, he walked through grounds littered with smashed police barriers and broken windows, passing officers and others injured as the crowd surged toward the Capitol, prosecutors said.

“Time and time again, rather than turn around and retreat, Hodgkins pressed forward,” the government said.

Some reacted with incredulity and outrage at what they saw as a lenient sentence and in some cases bias, especially compared with situations such as in Texas, where a Black woman from Fort Worth, Crystal Mason, was sentenced to five years in prison after being convicted of illegally voting even though she didn’t know she was ineligible when she went to the polls in 2016.

And another Texan, Hervis Rogers, who now faces the possibility of a stiff sentence after being declared ineligible to vote because he was on parole, and had waited in line for seven hours.