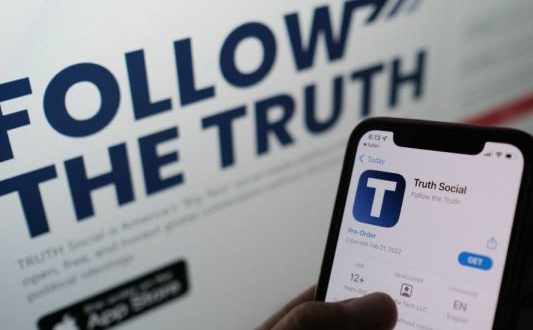 Donald Trump’s Social Media Company  says it has agreements in place to raise $1bn from investors ahead of a US stock market listing.

The Trump Media & Technology Group, which will be listed on the Nasdaq, plans to launch a new social media platform next year called Truth Social.

It comes as Mr. Trump remains banned from Twitter and Facebook following the attack on the US Capitol in January.

“$1bn sends an important message to Big Tech that censorship and political discrimination must end,” he said.

“As our balance sheet expands, Trump Media & Technology Group will be in a stronger position to fight back against the tyranny of Big Tech.”

Mr. Trump announced plans to launch Truth Social earlier this year, saying it would allow conversation “without discrimination on the basis of political ideology”.

Spacs, which became a major story in the US stock market at the start of this year, are shell companies that are set up with the sole purpose of merging with a private firm to take it public. However, they have lost much of their lustre after some of the companies that merged with them failed to deliver on their ambitious financial projections.

On Saturday, Mr. Trump’s firm said it had secured the $1bn from “a diverse group of institutional investors” without revealing who they were. According to reports, the social media venture is now valued at almost $4bn.

It would appear to underscore the former US president’s ability to attract strong financial backing despite the controversy surrounding his time in charge.

Mr. Trump was banned from top social media platforms after the 6 January attack by his supporters on the US Capitol in Washington DC amid concerns the then-president would inspire further violence.

It came after Mr. Trump made claims, without evidence, of widespread fraud in last year’s presidential election.

Many Wall Street firms snubbed the opportunity to invest in the former president’s new venture, according to Reuters. But some hedge funds, family investment firms and high net-worth individuals have backed it.

He has also repeatedly dropped hints that he might seek the presidency again in 2024.

However, there have been questions about the state of the former president’s finances. Last month a congressional committee found he had “grossly exaggerated” the profitability of his Washington DC hotel – claims the Trump Organization called “misleading”.

The SEC has declined to comment on whether it plans any action.

Truth Social is scheduled for a full rollout in the first quarter of 2022. It is the first of three stages in the Trump Media plan, followed by a subscription video-on-demand service called TMTG+ that will feature entertainment, news and podcasts, according to the news release.

In a slide deck on its website, the company envisions eventually competing against Amazon.com’s AWS cloud service and Google Cloud.