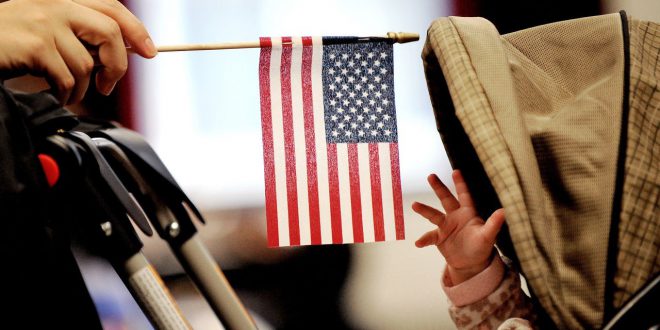 The Trump administration has revived discussions around taking executive action targeting birthright citizenship in its final weeks before leaving office, according to two people familiar with the discussions.

President Trump has spoken throughout his first term about ending birthright citizenship. Drafts of a possible order have been circulating for some time, and there is now internal discussion about finalizing it before the Biden administration takes over in January, sources said.

The administration is aware the order would be promptly challenged in court, but officials would hope to get a ruling on whether birthright citizenship is protected under the 14th Amendment, according to one source familiar with the plans. Many lawmakers and experts have argued it is protected, but the courts have not definitively ruled on the issue.

“Since taking office, President Trump has never shied away from using his lawful executive authority to advance bold policies and fulfill the promises he made to the American people, but I won’t speculate or comment on potential executive action,” White House deputy press secretary Judd Deere said in a statement.

The Department of Justice has been consulted about a possible birthright citizenship order given it would deal with the legal implications of the new policy. A spokeswoman for the department did not immediately respond to a request for comment.

The birthright citizenship measure is being discussed as one of multiple executive actions the Trump administration could take on its way out the door. White House chief of staff Mark Meadows told aides following Election Day to come up with possible policy priorities to push through in the two months before Inauguration Day.

Others in the works include additional reforms to the H-1B visa program, regulatory reforms and measures targeting China. The president earlier Friday announced two major actions aimed at lowering the price of prescription drugs.

The wave of action reflects how many in the White House are attempting to cement their agenda before the Biden administration takes over in January, even as Trump refuses to concede the race and has pursued thus far unsuccessful legal challenges in key battleground states.

The president first proposed ending the practice that grants citizenship to those born in the United States during his 2016 presidential campaign. He revived the idea in 2018 during an Axios interview, saying he would sign an executive order to enact the change.

In each instance, lawmakers and legal experts have pushed back on the idea and cast doubt on Trump’s ability to unilaterally end birthright citizenship. They have asserted that birthright citizenship is protected under the 14th Amendment, which states, in part, that “all persons born or naturalized in the United States, and subject to the jurisdiction thereof, are citizens of the United States and of the State wherein they reside.”

Some outside groups and allies of the administration have wondered why Trump has waited until his final weeks in office to follow through on a birthright citizenship order that he has talked about for years.

“The Citizenship Clause of the 14th Amendment was clearly intended to guarantee that emancipated slaves would properly be recognized as U.S. citizens,” said RJ Hauman, government relations director at the Federation for American Immigration Reform. “It is a fundamental misapplication of this clause that U.S.-born children of illegal aliens are granted automatic citizenship, much less the offspring of people who come here to simply give birth on American soil.”

“If the president finally issues a long-awaited executive order limiting birthright citizenship, it will be up to the Supreme Court to resolve this issue once and for all,” Hauman added.

The Trump administration issued an order in January restricting visas applications for women believed to be traveling to the United States primarily to give birth. Some administration officials had hoped at the time that the so-called “birth tourism” order would dissuade the president from pursuing a full-on order to block birthright citizenship.

Trump campaigned for his first term on a message of restricting legal and illegal immigration, and he has imposed policies that limit asylum, drastically reduce the number of refugees and that separate migrant children from their families.

But even if an order targeting birthright citizenship fails on legal grounds as some of his other immigration measures have, or if it is quickly undone by the Biden administration, experts cautioned that it could still have a chilling effect on those seeking to come to the United States.

“That’s going to have a deterrent effect on people who are seeking to come here, who may be present,” said Shev Dalal-Dheini, director of government relations for the American Immigration Lawyers Association. “The goal of this administration with all of its policies is it doesn’t matter if the policy actually takes effect and becomes the law of the land, but it’s what is the deterrent effect on people in the interim.”

Charles Igbinidu is a Public Relations practitioner in Lagos, Nigeria
@https://twitter.com/ionigeria
Previous Why some Catholic Church Bishops and Groups are worried about Biden’s Presidency despite being a catholic
Next Nigeria’s economy enters another recession in five years