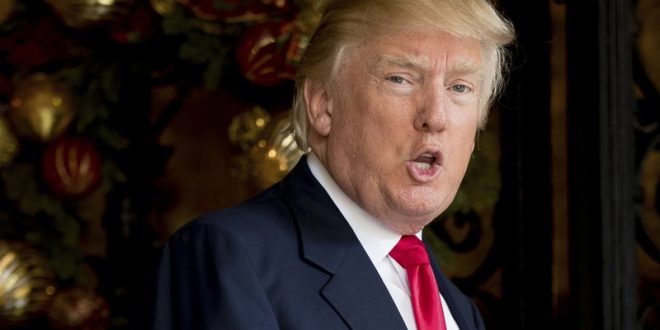 Trump to roll out new travel restrictions, says “I’m following through on what I pledged”

“I’m following through on what I pledged,” he said, pointing out that the travel ban was only holding true to his campaign promises rather than deceive his supporters by reneging on his promises.

President Donald Trump says his administration will be rolling out a new set of immigration order on travels and refugees next week to replace the controversial one blocked by the courts.

Trump, who made the announcement during a televised press conference on Thursday, pledged to keep Americans safe as he promised during his campaign.

“Our administration is working day and night to keep Americans safe including you reporters. A new set of executive actions next week will comprehensively protect our country. We’re going to put in place a new set of travel ban.

“The (blocked) roll out was perfect because if we had announced that (ban), a lot of bad people would not have come into our country.

“The new Executive Order will be based on the decision of the courts.

“But now there is serious vetting,” he said, adding that he was willing to deal with dreamers” who were brought into the U.S. illegally as children, “with heart” as a father who has kids and grand children.

According to him, he has ordered a crackdown on sanctuary cities that violated the federal laws by providing safe haven for illegal immigrants.

“I’m following through on what I pledged,” he said, pointing out that the travel ban was only holding true to his campaign promises rather than deceive his supporters by reneging on his promises.

Trump also claimed that his administration inherited a mess in the U.S and overseas when he took over.

“I inherited a mess in United States and overseas,” Trump said adding, however, “this administration is running like a fine-tune machine in spite that I can’t get my cabinet approved.

“Our cabinet will be one of the greatest in American history.

“We will renegotiate fair trade deal, we’ve been treated unfairly. Other countries have been taking advantage of us for decades. We cannot continue to let that happen.

“There has never been a presidency that has done so much in a very short period of time,” he said.

The president emphasised that he would “repeal and replace Obamacare by March”, insisting that the healthcare plan was a disaster.

He insisted that the Russia scandal was a ruse that was meant to cover up for the loss of Democrats and Hillary Clinton, but emphasised that it was better for the U.S. to get along well with Russia.

Trump, however, described the leak as illegal, and vowed that the leakers of classified information, whom he claimed to be the Obama’s hangovers, would be caught and made to face the law.

“It will be great to get along with Russia. I want to do the right thing for the American people and for the world. We are a very powerful country and so they (Russia) are. They are nuclear powerful but it will be in our country’s interest.

“I don’t think Putin is testing me. But whether we are going to get along, I don’t know because I’m not going to tell you. I don’t have to tell you what my response to Russia is.

“Russia is a ruse. I’ve never done anything for Russia. I don’t have any connection with Russia.

“Putin called me on the election victory and also on the inauguration and it was a fantastic conversation, especially the second one just like almost all leaders all over the world called me.’’