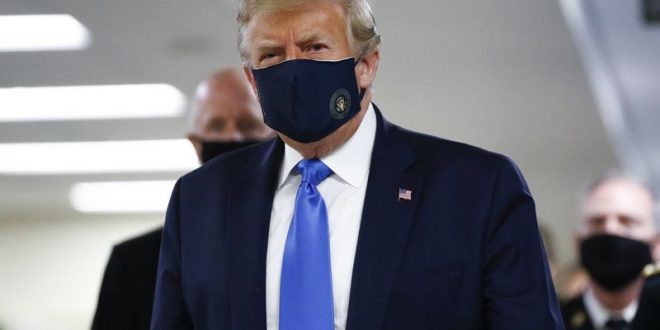 President Donald Trump  of the United States of America has arrived at Walter Reed National Military Medical Center where he will remain “for the next few days” following his positive test for the coronavirus.

Trump walked out of the White House residence  Friday evening clad in a mask, offering a wave and a thumbs up to reporters as he boarded Marine One to travel to the medical center in Bethesda, Md.

The president was able to make the walk under his own power, and he saluted the Marine outside the helicopter door before boarding. Trump was followed by chief of staff Mark Meadows and members of the White House medical unit.

A small crowd had gathered outside Walter Reed Medical Center as Trump arrived at 6:30 p.m., snapping photos through the fence.

The White House has said Trump’s symptoms are mild and that he is in good spirits.

“President Trump remains in good spirits, has mild symptoms, and has been working throughout the day. Out of an abundance of caution, and at the recommendation of his physician and medical experts, the President will be working from the presidential offices at Walter Reed for the next few days. President Trump appreciates the outpouring of support for both he and the First Lady,” White House press secretary Kayleigh McEnany said in a statement.

A White House spokesman said there were no plans to transfer power from Trump to Vice President Pence in light of Trump’s trip to Walter Reed.

The White House has been insistent throughout the day that Trump was hard at work, feeling “energetic” and only experiencing mild symptoms. But he had been silent on Twitter since roughly 1 a.m., an unusual stretch of silence from him, and officials had declined to get into specifics about his condition.

A person familiar with the matter said Trump was running a slight fever in addition to feeling fatigued.

White House physician Sean Conley issued a memorandum Friday saying that Trump “remains fatigued but in good spirits” and received a cocktail of polyclonal antibodies as a precautionary measure after being diagnosed with the novel coronavirus.

“As a precautionary measure he received a single 8 gram dose of Regeneron’s polyclonal antibody cocktail. He completed the infusion without incident,” Conley said in a memorandum issued Friday afternoon, referring to an experimental treatment that has shown some effectiveness for patients with the virus.

“In addition to the polyclonal antibodies, the President has been taking zinc, vitamin D, famotidine, melatonin and a daily aspirin,” the physician added.

“As of this afternoon the President remains fatigued but in good spirits. He’s being evaluated by a team of experts, and together we’ll be making recommendations to the President and First Lady in regards to next best steps,” Conley continued.

First lady Melania Trump, who along with the president tested positive in the early hours of Friday morning, “remains well with only a mild cough and headache,” the White House physician said. He also said that the “remainder of the First Family” has tested negative for the virus.

Reaction flowed in from Trump’s family and the political world as they awaited the president’s departure to Walter Reed.

“This cannot be a partisan moment. It must be an American moment,” Democratic presidential nominee Joe Biden tweeted. “We have to come together as a nation.”

The president’s second son, Eric Trump, described his father as a “true warrior.”

“He will fight through this with the same strength and conviction that he uses to fight for America each and every day,” he tweeted. “I ask you to join me in praying for his recovery. I have never been more proud of someone and what they have had to endure.”

Trump’s positive test rattled the White House and roiled an already volatile reelection campaign. The president and first lady are self-quarantining, and Trump has put off in-person campaigning for the time being.

Trump, who is 74 and overweight, falls into a high-risk category for the coronavirus, which has been found to be particularly deadly among senior populations.

Trump tested positive after one of his top aides, Hope Hicks, was diagnosed with the virus early Thursday, a development that became public knowledge Thursday evening.

After Trump tweeted that he and the first lady had tested positive, Conley issued a memo confirming their diagnosis and stating that they are “both well at this time.”

Meanwhile, other White House officials have tested negative for the virus, including Pence, Meadows, and Trump’s daughter Ivanka Trump as well as her husband Jared Kushner, both of whom are senior White House advisers.

Pence took Trump’s place on a conference call with governors about protecting vulnerable seniors from the coronavirus earlier Friday.

The rapid escalation of Trump’s situation — from feeling “very energetic, according to the chief of staff, to heading to the hospital within roughly 7 hours — reflects part of a broader problem the White House faces in issuing credible information about the president’s health.

The White House has not disclosed when individuals close to the president have tested positive for the highly contagious virus until they have been widely reported, and the president’s abrupt visit to Walter Reed last fall has never been fully explained.

Charles Igbinidu is a Public Relations practitioner in Lagos, Nigeria
@https://twitter.com/ionigeria
Previous Nursing mother and her baby allegedly detained in hospital for 7 months over her inability to pay bills
Next Rector of Auchi Polytechnic Dr. Momodu Jimah is dead