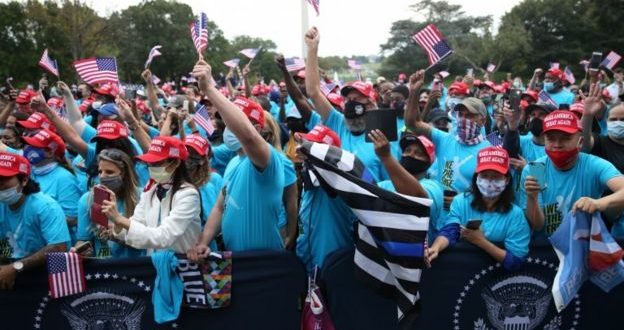 Donald Trump has urged supporters to vote his rivals into “oblivion” during his first public campaign appearance since being treated for coronavirus.

Hundreds of supporters gathered on the White House lawn in matching T-shirts and hats as the US president spoke to them from a balcony on Saturday evening.

It was his first public event since leaving hospital earlier this week following his COVID-19 diagnosis – and he’s also planning a rally in Florida on Monday.

Mr Trump lapped up chants of “four more years” and “we love you” as he spoke about law and order, coronavirus, alleged ballot irregularities, and other issues in a relatively short speech by his standards.

Most of the crowd wore masks but many were not socially distanced.

With the president lagging in the polls with less than a month to go to the election, he claimed his support was three times greater than when he was elected.

He urged supporters: “We’ve got to vote these people into oblivion – we’ve got to get rid of them.”

The president also said he was “feeling great” after leaving hospital just days ago.

Earlier, he had said he was off medication and either coronavirus-free or at the “bottom of the scale”.

It is not known whether he is still contagious, but the White House has said tests will ensure he will not be able to transmit the virus while out campaigning.

Seemingly referring to his “drive-by” outside hospital last Sunday – when he greeted supporters – Mr Trump said he had no regrets, despite being criticised for potentially risking the health of Secret Service agents.

“I was watching down over so many people, and I went out to say hello to those people and I took a little heat for it – but I’d do it again,” he said.

Mr Trump said the US would “defeat this terrible China virus” and claimed a vaccine was imminent and would be distributed rapidly by the military.

A number of vaccines are at an advanced testing stage following encouraging results, but it’s unclear when any might be signed off and available for more widespread use.

Turning his attention to his rival for the presidency, Joe Biden, he accused him of “betraying” black and Latino Americans, and said Democrats had failed the inner cities.

“Their policies have delivered nothing but calamity, poverty and trouble,” he said.

“If the left gains power they’ll launch a nationwide crusade against law enforcement – and they’ve already done that,” added the president.

He also made claims about postal votes being “thrown out” with his name on them – something critics believe he may use to cling to power if the elections is close.

“Every day there’s a story about ballots,” he said. “Some thrown out… military ballots were thrown out with the name Trump on them.”

The White House event came after proposals for a second presidential debate – that would have been held virtually -were scrapped.

The committee that arranges the debates has said it will now focus on preparation for the final scheduled debate on 22 October – just a few weeks before the bid day on 3 November.