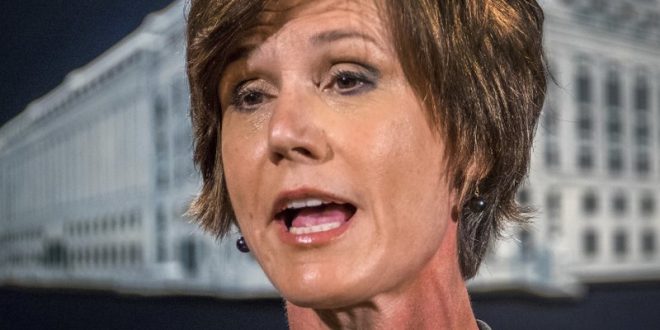 WASHINGTON (AP) — Accusing her of betrayal and insubordination, President Donald Trump on Monday fired Sally Yates, the acting attorney general of the United States and a Democratic appointee, after she publicly questioned the constitutionality of his controversial refugee and immigration ban and refused to defend it in court.

The firing came hours after Yates directed Justice Department attorneys not to defend the executive order, saying she was not convinced it was lawful or consistent with the agency’s obligation “to stand for what is right.” Trump soon followed with a statement accusing Yates of having “betrayed the Department of Justice by refusing to enforce a legal order designed to protect the citizens of the United States.”

He immediately named longtime federal prosecutor Dana Boente, the U.S. Attorney for the Eastern District of Virginia, as Yates’ replacement.

Boente was sworn in privately late Monday, the White House said. He promptly order Justice Department lawyers to “do our sworn duty and to defend the lawful orders of our President.”

Boente said Trump’s executive order was “both lawful on its face and properly drafted.”

Yates’ refusal to defend the executive order was largely symbolic given that Sen. Jeff Sessions, Trump’s pick for attorney general, will almost certainly defend the policy once he’s sworn in. He’s expected to be confirmed Tuesday by the Senate Judiciary Committee and could be approved within days by the full Senate.

national security officials — Defense Secretary Jim Mattis, Homeland Security Secretary John Kelly and Rex Tillerson, who is awaiting confirmation to lead the State Department — have told associates they were not aware of details of the directive until around the time Trump signed it. Leading intelligence officials were also left largely in the dark, according to U.S. officials.

Charles Igbinidu is a Public Relations practitioner in Lagos, Nigeria
@https://twitter.com/ionigeria
Previous Apprentice: Why I kidnapped oga’s son
Next “I am a politician, I will always be a politician” says Ibori as he plans return home