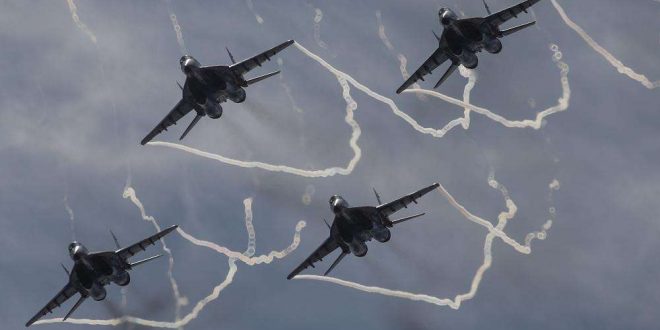 A fundraising ad for US president Donald Trump’s re-election campaign reportedly used a stock photo featuring Russian fighter jets and weapons as part of a call for viewers to “support our troops”.

The ad, which has since been removed, was made by the Trump Make America Great Again Committee, which is run by the Republican National Committee (RNC) and the Trump campaign. The stock image shows five soldiers in silhouette against a sunset as the three planes fly overhead.

Pierre Sprey, who helped design US Air Force planes, told Politico the jet featured in the ad is “definitely a MiG-29”, as did the director of the Centre for Analysis of Strategies and Technologies in Moscow, Ruslan Pukhov.

“I’m glad to see it’s supporting our troops,” said Sprey. Pukhov pointed out that at least one of the soldiers in the image was also carrying Russian-made AK-74 assault rifle.

Politico said the Trump campaign did not respond to a request for comment, and the RNC declined to comment.

The MiG-29 was designed by the Soviet Union in the 1970s to combat US fighter jets.

Their appearance in the campaign ad comes as recent reports from intelligence officials have suggested that the Russian government is meddling in the US election by attempting to undermine Joe Biden, the Democratic candidate, in order to boost Trump’s chances of winning.