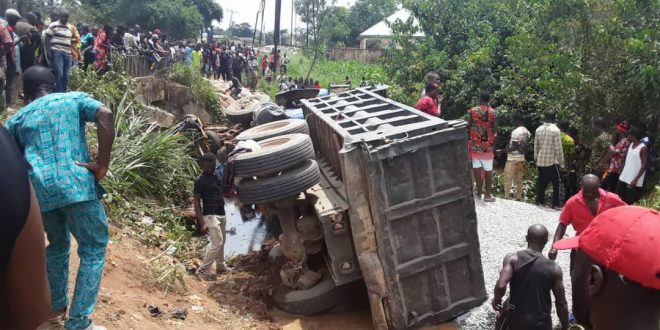 A truck lost control in Imo on Saturday and ran into a market, killing at least 10 women.

The incident which happened around 12 noon at the intersection between Anara-  Orlu, and Amaigbo – Amaraku Expressway left many others injured.

It was gathered that the truck which was descending a hill lost control killing the women after ramming into other vehicles.

A witness, Adolphus Adolphus, said some of the victims were pushed into the nearby river.

According to him, the community was battling to retrieve others who were trapped between the truck and the vehicles.

He said, “The worst has happened here. A truck that lost its brakes has killed women trading on the road at Nkwommiri.  More than ten of them and many trapped.

Another witness,  Frank Ozuruigbo, said that the community was working with government officials to rescue those trapped.

When contacted, the Police Spokesperson in the state, Orlando Ikeokwu, confirmed the incident.

He said 10 people died on the spot while efforts are on to rescue those trapped.

Charles Igbinidu is a Public Relations practitioner in Lagos, Nigeria
@https://twitter.com/ionigeria
Previous Kenya plans to ban romance between police officers
Next ‘I have found myself praying that God should remove Buhari’ – PFN President