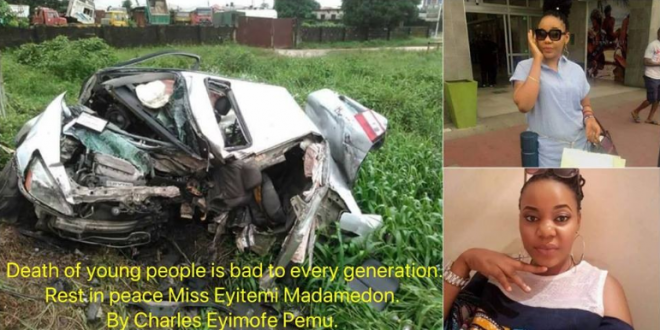 Double Tragic: Father Of DESOPADEC Staff Who Died In An Accident Few Weeks To Her Wedding, Collapses, Dies In Delta

A double tragedy has occurred in the family of Madamedon in Delta state following the deaths of a lady and her father.

According to reports, the father passed away upon hearing that his daughter had died in an accident along the NPA expressway in Delta.

It was revealed that the daughter, Miss Eyitemi Madamedon, ran into an abandoned truck along NPA expressway as a result of the indiscriminate parking of tankers along the road.

The lady’s father – was said to have yesterday night after hearing that his daughter is dead.

Late Eyitemi  who was scheduled to have her wedding in August, died in a fatal accident in Warri, Delta state.

According to a family,  Eyimofe Pemu, who took to facebook to mourn her, the deceased, Eyitemi who was until her death a staff of DESOPADEC, had just left Shoprite in Warri and was driving home in company of two friends when she lost control and rammed into a parked tanker along NPA express by Nigercat area off Ekpan/Warri road. She died on the spot while her friends lost consciousness and were rushed to the General hospital.

Eyitemi was schdeuled to travel to the US today or tomorrow to shop for her wedding. Read what her family friend wrote about her death below

“A beautiful leaf from the tree of the future has fallen and it is a great loss to the entire Warri kingdom beyond just the Itsekiri speaking tribe of the Niger Delta: Death is a gift when it comes at old age and a pain when it comes too early, for it is better to lose a parent at a tender age than a parent to lose a child at whatever age. What else could be most disheartening and heartbroken than a parent burying their children who should bury them after a fulfiled life here on earth?

“Yesterday Sunday at the hour of about 2am in the morning ushered a sad moment not only to the families of the Madamedon, but for the entire Kingdom of Warri and and beyond when the sad news broke that Miss Eyitemi Madamedon has been involved in a fatal car accident along the NPA express by Nigercat area of Ekpan/Warri on her way from Shoprite.

According to information available, has it that she was in a company of two of her friends all female on her way driving from Shoprite when she lost control of her car and ran into rank tanker truck parked along the road and she died on the spot while the other two friends were on unconscious, for it took the intervention of a mobile police unit that was on patrol who rescued them to general hospital for emergency attention while the remains of Miss Eyitemi was deposited in the mutuary, until her death she was a staff of DESOPADEC Agency.

“The saddest thing is that according to information available to me has it that she set to get married in the month of August in which she has already concluded plans to travel to the US today or tomorrow but it unfortunate she has been snatched by death. May her peaceful and loving soul rest and it is my prayers that God give to her families and friends the strength to bear their great loss

?, but what they should understand is that she is an angel who dwells amongst humans with a purpose to put a smile on the faces of others which is the primary essence of life but it’s unfortunate she cannot live amongst human in this sinful world forever. My advice is that we should be prayerful and very careful even though we cannot live forever but to live to a fulfiled and expected end according to wishes of our Creator and not that of man, for the hearts of man is very wicked.

“Lastly, we should remember that this world is not our own as we are only passing through to another which is either to heaven or hell, therefore, we should make our days on earth remarkably count for good by bringing meaning to lives of everyone around us. Death is sad but we must remember we are not created to live forever but for a purpose which is beyond living for ourselves and immediate families but for others as well. I may not have met her in person neither did I know her name before now but from the information gathered she lived a beautiful life by making the lives of others beautifully interesting.

“Conclusively, I hope the government of Delta state under the administration of Sen Ifeanyi Okowa through his commissioner for transport (Vincent Uduaghan) and commissioner for works will now see the need to act fast on how to contain bad roads and the irresponsible parking of trucks along the roads which his predecessor (Dr Emmanuel Eweta Uduaghan) failed to do as governor of the state for 8yrs? The local government should constitute a sanitation committee with a responsibility to keep our environment clean, safe and secure.

May their souls rest in perfect peace.