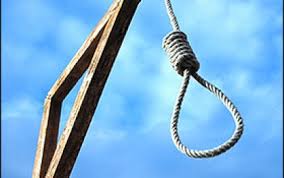 Traditional Ruler To Die By Hanging In Delta

Newton Agbofodo, a village head of Ekpan, Uvwie Council Area of Delta State, has been sentenced to death for murder.

He’s one of the highest ranking chiefs of Uvwie Kingdom. He was arrested on June 17, 2016, and was later arraigned in court for crimes bordering on murder.

He  was sentenced by the Delta State High Court 4, in Asaba, after being found guilty of all four count charges  preferred against him. He was sentenced to death by hanging.

According to reports, he was alleged to have been linked to series of killings within Ekpan and its environs, including the murder of one Edigbe Ikpesa sometime in Oc­tober 2012.

He was also implicated in the Delta Mall robbery/wanton de­struction in January, 2016