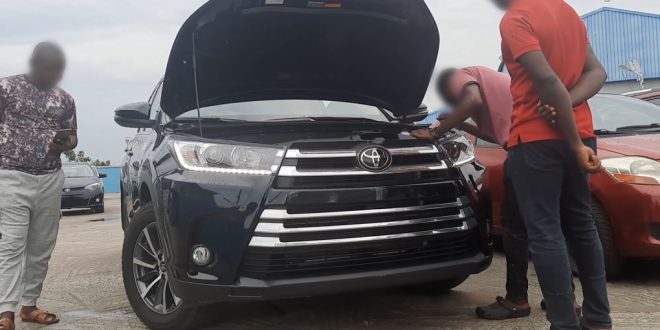 A Toyota Highlander stolen from Toronto in Ontario, Canada, in September 2021 has been tracked to a car dealer’s store in Amuwo Odofin, Lagos State.

According to CTV News, a news outlet based in Canada, the vehicle belonging to Ahmad Abdallah, a Toronto resident, was on sale, alongside other cars with foreign plates at the store.

In an investigation that involved the tracking of cars stolen from Canada, CTV News found a Toyota Highlander that looked like Abdallah’s stolen vehicle and teamed up with Nigerian journalists to investigate its source.

The team eventually met with the car dealer to examine the car in a gravel lot in Amuwo Odofin, Lagos State.

Although the dealer claimed the car was imported legally from the United States, he refused to share the paper works. However, identifying marks on the car confirmed it was Abdallah’s.

“One of those Toyota Highlanders looked a lot like the car that was stolen from Abdallah in September. CTV News Investigates hired a team of Nigerian journalists to look into the situation,” CTV News wrote.

“The team arranged to meet the vendor in a gravel lot in Amuwo Odofon, just west of the Nigerian capital, Lagos, in mid-April. The seller met the group and brought them over to the Highlander to examine it.

“He claimed the car was imported legally from the United States. But when the people posing as buyers asked to see the paperwork, he wouldn’t share it.

“However other identifying marks, when seen up close, confirmed it was indeed Abdallah’s car. And in the same lot, there was another car with Quebec plates.”

In August 2021, Zainab Ahmed, Minister of Finance, Budget and National Planning said a majority of vehicles imported into Nigeria were stolen.

While delivering a keynote address at the zonal sensitization seminar on the National Vehicle Registry (VREG) policy in Abuja, the minister also said statistics showed that Nigeria has become the hub of stolen vehicles.