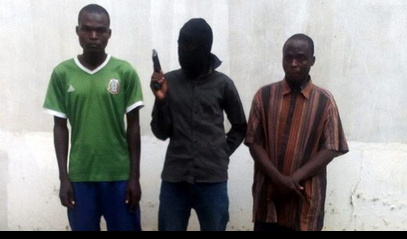 Operatives of the State Security Service, SSS, in Kano, have rescued a three-year-old boy, who was held hostage by kidnappers for 11 days.
The boy was abducted on December 8 and the family reportedly paid N200,000 as ransom to the abductors on December 11. The kidnappers lived in the same area with the victim.

They initially asked for a ransom of N20 million before scaling it down. Part of the ransom, including a toy gun, knife and mask were recovered.

The three suspects include Abba Tijani 17, a secondary school student; Jamilu Alhassan, who claimed to be a student at the Bayero University, Kano; and Umar Salisu, 27.

They reportedly confessed to the crime. The leader of the trio, Mr. Salisu, said they decided to engage in crime after frequent watching of foreign films.