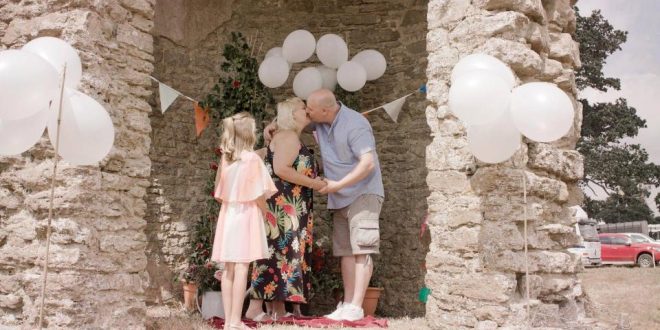 Laura Curtis asked her partner Peter Davies to marry her

A man from Kent got a huge surprise when he received both a wedding proposal and an adoption request – at the same time.

When Laura Curtis decided to ask for her partner’s hand in marriage, she wanted to make it as special as possible.

Ms Curtis opted to pop the question during the Yeovil Show in Somerset in the site’s 19th Century Rose Tower, having read that the agricultural show’s organisers were searching for someone to use the tower for a proposal.

The proposal was especially poignant for Ms Curtis and her partner of 10 years Peter Davies, as they’d recently endured a difficult period of time due to health complications.

Not along ago, Ms Curtis had an operation that went wrong and resulted in her having to use crutches.

This led to the couple having to postpone their plans to tie the knot.

However, having found the perfect spot for the proposal, Ms Curtis and her 13-year-old daughter Madison made preparations to make the occasion even more memorable.

Ms Curtis, Mr Davies, Madison and the couple’s nine-year-old daughter Savanna stood together in the tower, which had been decorated with white balloons and colourful bunting.

First, Ms Curtis asked her partner to marry her, to which he responded ‘yes’.

After being presented with his engagement ring, Madison then stepped up, asking Mr Davies to formally adopt her.

Mr Davies accepted, before also giving his youngest daughter a hug as well.

Sam Mackenzie Green, event director of Yeovil Show, explained that they’d hoped to put the scenic tower to good use.

“We really wanted to put it to good use at Yeovil this year and we may even look at applying fo a wedding licence for it in the future,” he said.