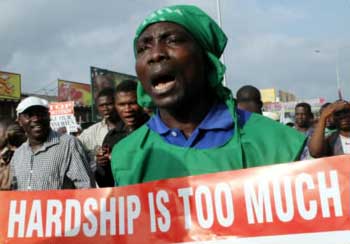 It is no secret that the Nigerian economy is in crisis. In the last six months, the official Nigerian currency, Naira, has fallen by almost 50% and there has been an increasing change in the price of goods and services. With pay increases lagging behind and the inflation soaring, the wallet of most Nigerians continue to take a beating as the cost of living increases in just about every aspect of daily life.

Listed below are the top 5 ways the crisis is affecting the everyday life of Nigerians.

From  prospective civil servants to bricklayers just looking for an hour pay, citizens in the country are now faced with extreme difficulty in securing job opportunities as most employers can no longer afford to pay as much as they used and are instead laying off staff to ensure they maintain operations. Even marketers and sellers can no longer make as much sales as they used to and most have closed shop, as consumers now tend to buy less, switch to less-expensive substitutes or drive farther to find bargains.

Increase in cost of living

The recent times have witnessed significant increase in food, fuel and utility costs. This means that less money remains once these necessities are paid for, leaving little for savings or discretionary spending. While the effect of this hike in cost of living has affected almost all citizens in their daily life, the rising prices have hit the lower and middle classes especially hard. It is quite difficult to keep up with the rising cost of living when your pay check is not growing at a similar rate.

There are increased incidents of theft and kidnapping for ransom around the nation. It is getting hard to earn an honest living and some who feel like they have no other choice give in to different vices and extort money from others either by conning them, or forcefully taking it from them. The people, both rich and poor, are therefore more prone to security risks; and the culprits when caught, face the prospect of jail term.

The economic crisis in Nigeria is friendly to debtor but of huge disadvantage to creditors as thanks to the continued inflation, Â amount borrowed will eventually deteriorate in value so that the debtor pays back less money and the creditor receives less money. This has been harder for financial institutions, including banks to give out loans in recent times to prospective entrepreneurs and traders and as such, most are finding it hard to keep their businesses afloat or grow them any further than it already is.

The economic crisis has ensured the life of the average Nigerian is becoming more difficult by the day. A majority of Nigerians are suffering from depression and as such, are now finding it hard to go on with their daily lives. In a bid to make ends meet many stay on the hustle and are forced to manage all kinds of stress, from physical to emotional. This has led to an increase in death rate and a decrease in fertility rate in the country.

Charles Igbinidu is a Public Relations practitioner in Lagos, Nigeria
@https://twitter.com/ionigeria
Previous I stand by our endorsement of Ize-Iyamu says Onojie of Uromi
Next “Cynthia Whyte, Please Leave Me Alone.” – Metuh