Tom Cruise had thousands of pounds worth of luggage stolen after car thieves sped away in his bodyguard’s £100,000 BMW, pictured outside the hotel in Birmingham where the motor was stolen

Tom Cruise’s BMW was stolen in a high-tech theft in Birmingham as he filmed scenes for Mission: Impossible 7.

The Top Gun actor reportedly had thousands of pounds worth of luggage inside the car when it was nicked by car thieves.

The Sun reports that Cruise was “hopping mad” when he learned of the high-tech theft of the BMW X7 – which saw thieves whisk the car away in minutes from nearby Church Street.

The Hollywood superstar is in the UK filming scenes for ­Mission: Impossible 7  and staying at the Grand Hotel in the city centre.

Crooks used a scanner to clone the signal from the luxury car’s keyless ignition fob after it was parked outside a Birmingham hotel. 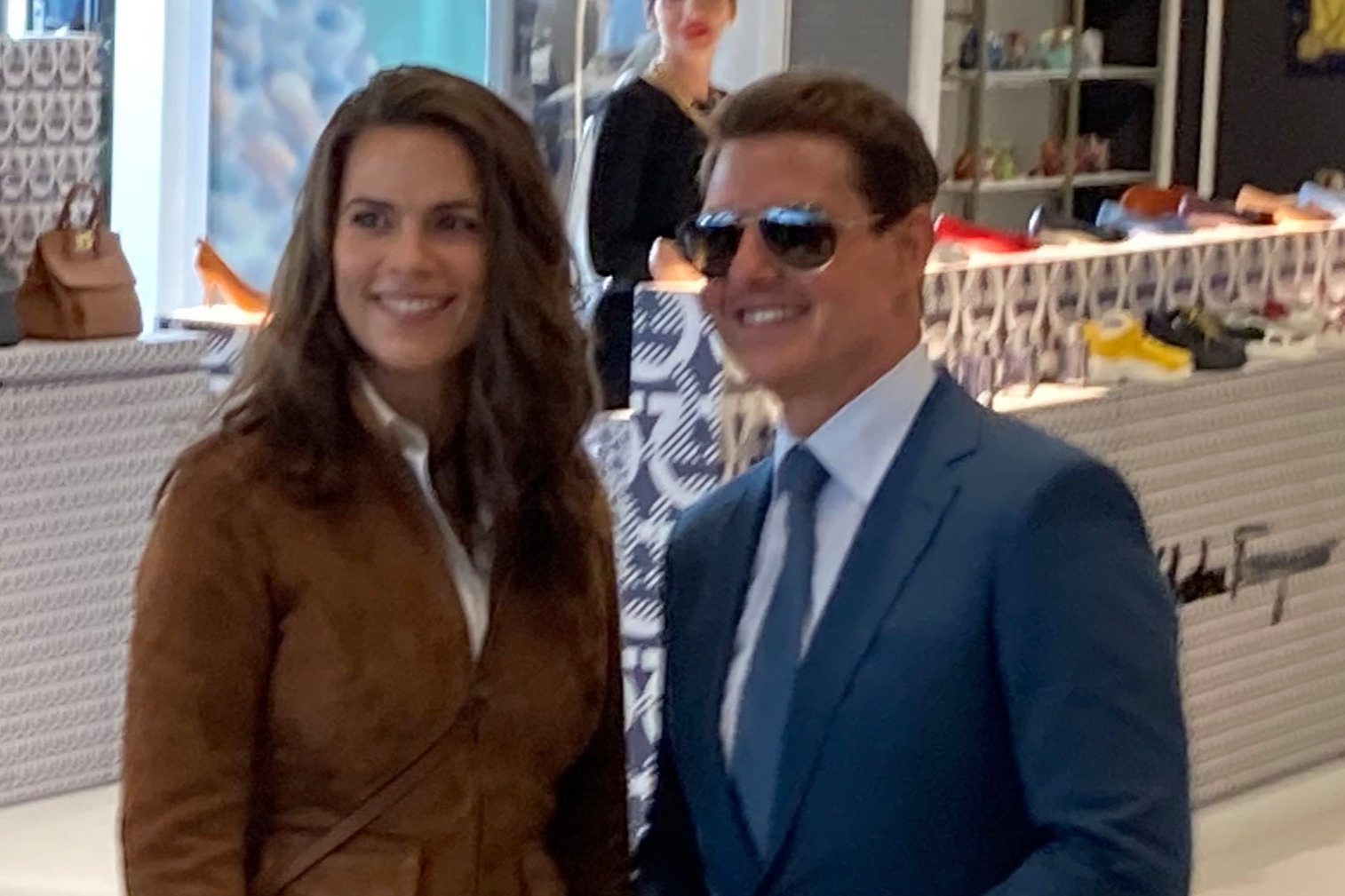 And the ruse — worthy of the ­gadget-packed MI movie series — enabled the gang to roar away with the car under the noses of the movie icon’s elite security team.

A source told the Sun: “Tom had been driven around in the car while in Birmingham and some of his ­luggage and belongings were inside it when it was taken.

“It’s since been recovered by police because it was equipped with an electronic tracking device but everything inside it had gone.

“It’s a huge embarrassment for the security team and the guy who had been driving it was hopping mad — but not as mad as Tom!”

Tom, 59, had been spotted earlier shooting scenes for the latest MI blockbuster with actress Hayley Atwell, 39, in a Birmingham shopping centre.

The bodyguard in charge of the star’s security staff in the city is understood to have found the BMW X7 had vanished from its parking space early on Wednesday.

Sources said the thieves were able to steal the black motor in minutes after intercepting the fob signal after it was left outside the Grand Hotel just a two-minute walk from West Midlands Police’s HQ. 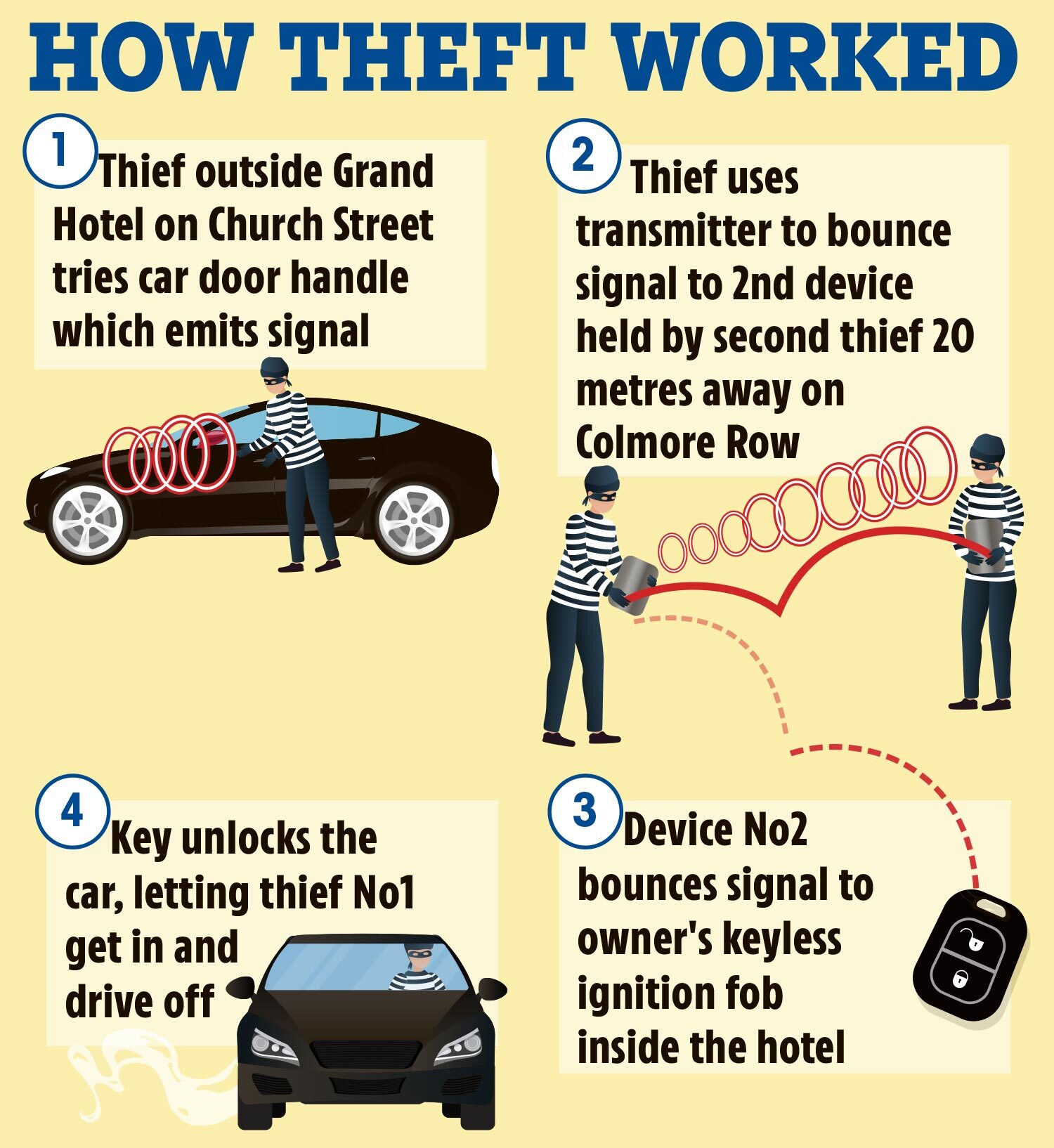 The new car is not believed to have been in a secure, barrier-protected car park recommended by the hotel an eight-minute walk away.

The bodyguard had been driving the Top Gun actor around for days in the powerful BMW limo — which can rocket from 0-60mph in 4.7 ­seconds — while shooting scenes in and around Birmingham.

Tom has been commuting by ­helicopter from a stunning Kent mansion where he has been staying during filming — and the car ­has been on permanent standby to collect him.

Thieves capture signals by getting the target car to emit a message to the keyless fob.

An accomplice standing close to the vehicle then captures the signal, fooling the car into thinking the key is within range, allowing it to be unlocked. Once the accomplice is inside the car, the process can be repeated to start the engine and a blank fob can then be programmed via the car’s computer port.

Alternatively, the thieves could have jammed the driver’s fob by transmitting the same radio frequency used to lock the car — so the vehicle remains unlocked, allowing access to its computer hardware.

Tom has been filming at locations across the UK — and wowed diners by dropping in for a curry at Asha’s Indian Restaurant in Birmingham at the weekend.

The city’s railway station was transformed to portray Abu Dhabi Airport for filming — and Tom and his co-stars smiled and waved at fans between takes. 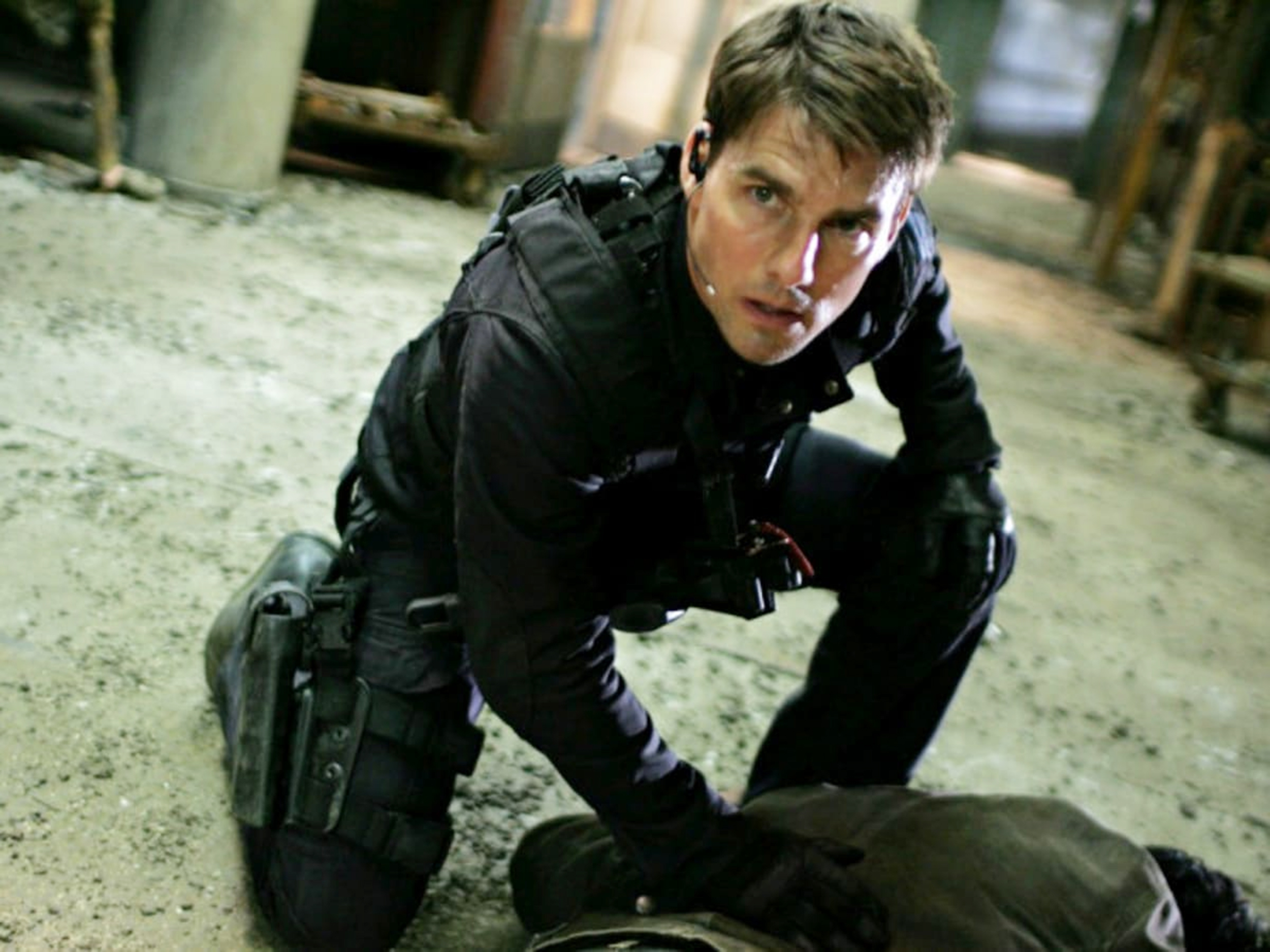 The screen idol, who plays Ethan Hunt in the money-spinning action spy films franchise, was also on set as a train was filmed going over the edge of a cliff at the former Darlton Quarry, in Derbyshire.

BMW were understood to have supplied an identical replacement for Tom’s use within hours of the theft. Paramount Pictures, which is making the new MI blockbuster, declined to comment last night.

A police spokeswoman said: “We received a report of a BMW X7 stolen from Church Street, Birmingham in the early hours of Tuesday morning. The car was recovered a short time later in Smethwick. CCTV enquiries have been made in the area that the car was recovered from. Inquiries are ongoing.”