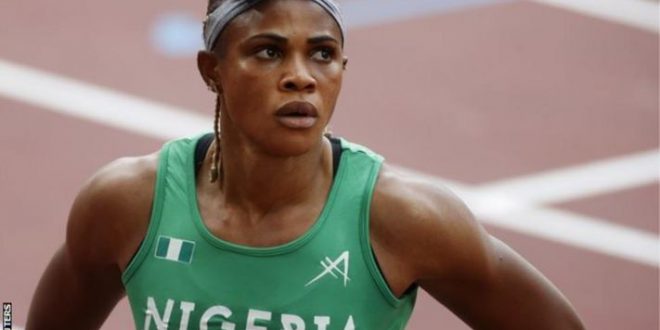 Sprinter Blessing Okagbare is out of the Tokyo Olympics after being suspended for failing a drugs test.

Okagbare had won her 100m heat on Friday and was due to race in the semi-finals on Saturday.

The Athletics Integrity Unit (AIU) said the 32-year-old had tested positive for a human growth hormone following an out-of-competition test on 19 July.

The AIU said Okagbare was notified of her provisional suspension on Saturday.

It added it would not be making any further comment at this stage.

Okagbare, Olympic long jump silver medallist in Beijing in 2008, had posted a time of 11.05 seconds in her 100m heat and was set to line up against Asher-Smith and Jamaica’s Elaine Thompson-Herath in the first semi-final.

The news comes two days after 10 other Nigerian athletes were declared ineligible for the Games.

The AIU ruled they were unable to take part because of non-compliance with out-of-competition drug testing requirements in the run-up to the Olympics.

Elsewhere, Kenyan 100m sprinter Mark Otieno will also not take part in the Games after he tested positive for a banned substance.

He was due to run in the 100m heats on Saturday but has been provisionally suspended.

Otieno denies any knowledge of the violation and has requested a re-test of his B urine sample.

He told news outlets earlier in the month that he was looking forward to proving Kenya could be equally successful in the sprint distances as the long-distance events.

Charles Igbinidu is a Public Relations practitioner in Lagos, Nigeria
@https://twitter.com/ionigeria
Previous Manchester United release new 2021-22 away kit inspired by ‘snowflake’ 90s shirt
Next kidnap crisis: ‘I saw my two-year-old carried by a man with a gun’