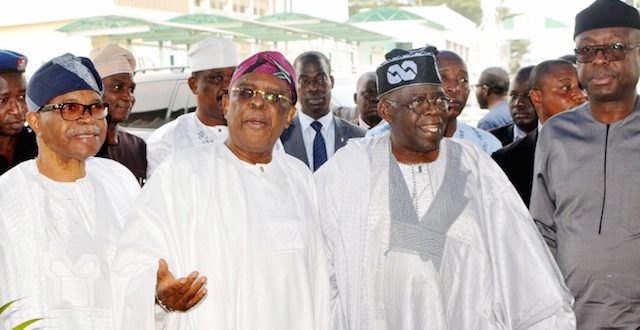 “We are together on all issues—”, says South-West APC leaders

All Progressives Congress (APC) leaders in the South West Zone of the country  say they remain  committed  to progressive politics.

A spokesman of the group and former governor of Ogun, Chief Olusegun Osoba, said this in Ibadan on Thursday after a four-hour  meeting held at the Executive Chamber of the Oyo State Governor’s Office.

He told newsmen  that the  meeting was specifically  held to discuss issues of all ramifications affecting the South West Zone.

“We met principally to discuss issues of all ramification affecting the South West and we have come out with a resolution to show that in the South West of APC, there is unity of purpose.

“We are together on all issues concerning the governance of this country.

“We have examined what the government that we are all involved in is bringing  and have reviewed all the issues.

“All those to be taken to Abuja  will be done by those concerned.

“ We have related with our representatives  at the National Assembly, party leaders and governors,” he said.

The former governor gave an assurance  that there would be total unity and consultation among the governors on the development of the South West Zone.

The News Agency of  Nigeria (NAN) reports that the meeting  was attended by Gov. Abiola Ajimobi of Oyo State, Gov.  Rauf Aregbesola of Osun, Gov.  Akinwunmi Ambode of Lagos and Gov. Ibikunle Amosun of Ogun.

Sen. Sola Adeyeye, the Senate Chief Whip and Hon. Femi Gbajabiamila, the Majority Leader, House of Representatives as well as former governors, Olagunsoye Oyinlola and Adeniyi Adebayo were also there.