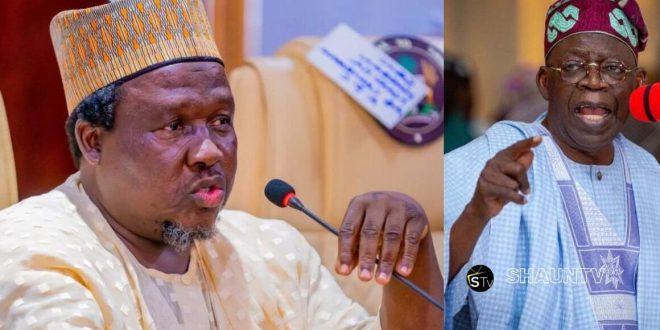 Asiwaju Bola Tinubu, Presidential Candidate of the All Progressives Congress (APC), says he is still searching for his running mate.

Tinubu, who has been in the news since the Independent National Electoral Commission (INEC) published particulars of 2023 candidates, spoke at the presentation of “Mr. Speaker”, a book in honour of Femi Gbajabiamila, Speaker of the House of Representatives.

In the INEC Form CF001 submitted on June 17, 2022, Tinubu did not provide details of his primary and secondary schools as the spaces were left blank. He also did not attach copies of his certificates, which he stated in an affidavit, had been stolen.

This generated speculations that the APC flag-bearer could be hiding some details or was unsure of his credentials.

A  civil society group, Center for Reform and Pubic Advocacy had written the Inspector General of Police, Usman Baba Alkali, demanding the arrest and prosecution of Tinubu within 48 hours over alleged perjury.

But speaking in Abuja during an event to mark the 60 birthday of Gbajabiamila, Tinubu said the search for his running mate was ongoing.

Daily Trust had reported how he picked Ibrahim Masari, a Katsina Politician as a placeholder to beat INEC deadline.

At the event to celebrate Gbajabiamila, Tinubu lauded the working relationship between the celebrant and his deputy, Hon Ahmed Wase, saying he needed to learn from them.

He said: “Femi with your determination, grit, you are a contributor to our democratic growth, thank you. You have character. You are a great mentor and you are doing a good job charting a path to success. You’ve done a good job and I say thank you, thank you.

“What you did during my primary is a story for another day. I’ve spent more time, too many times and people might be bored, they might be envious too, they might be jealous. I won landslide, I thank you.

“I could see his deputy (Wase) sitting down there too, you are a very good symbol of unity, dependability, and honesty, thank you. Thank you for both of you. You’ve not rocked the boat. I will need to learn from both of you, how you made the pair work because I’m still searching for my running mate.”

Charles Igbinidu is a Public Relations practitioner in Lagos, Nigeria
@https://twitter.com/ionigeria
Previous Furious Man Utd tells Cristiano Ronaldo he is not for sale after Chelsea transfer talks
Next Man Utd decide on next transfer priority after Frenkie de Jong breakthrough