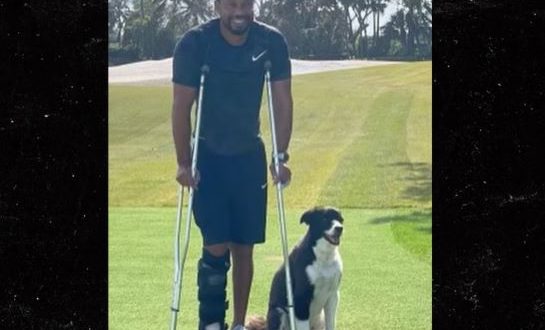 TIGER WOODS has revealed he will never return as a full-time golf professional after he was involved in a car crash last year.

Woods, 46, wrecked his SUV, hitting a tree before flipping his car – he was transferred to hospital by paramedics, where it was revealed he had suffered fractures to his tibia and fibula.

And the veteran told the press ahead of the Genesis Open that he is still struggling to walk since the accident.

His time on the golf course has been limited as a result and Woods was unable to share when he will be back on the PGA tour.

“Being in a cart, I can do that. But walking a golf course, that’s a totally different deal. I’ve got a long way to go.

“At this age, you just don’t heal as fast, which is frustrating.

“To be out here and play six rounds of golf, I’m not able to do that yet. I’m still working on getting to that point.”

Woods hasn’t been seen at a Major tournament since 2020 but did play alongside son Charlie in the 2021 PNC Championship.

Woods said: “Will I come back and play a full schedule? No. That will never happen again.

“I can play certain events here and there, but on a full-time level, no, that will never happen again.”

“I wish I could tell you when I’m playing again.

“I want to know. But I don’t. My golf activity has been very limited. I can chip and putt well but I haven’t done any long stuff seriously. I’m still working on the walking part.

Charles Igbinidu is a Public Relations practitioner in Lagos, Nigeria
@https://twitter.com/ionigeria
Previous Karim Adeyemi tipped to be at centre of transfer war after stellar performance against Bayern
Next Man Utd, Arsenal, and Co battle for fourth spot as Premiership hots up… but who has the toughest run-in?