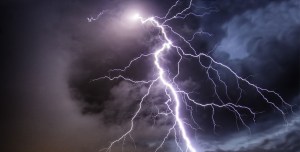 A woman carrying a seven-month-old pregnancy had reportedly been struck dead by thunderstorm in Ebonyi state, South-East Nigeria.

Beatrices husband, Nwobiya Godwin, said his late wife came out of the bathroom and began to gasp. Godwin said his wife was unattended to at two hospitals she was rushed to and died while being conveyed to the third one.

Also, two others – 20-year-old Sunday Oke and another woman – were killed in similar fashion at Ofiaokum and Okposhi Eshi communities respectively. The report said the boisterous wind, which heralded the thunderstorm, unhinged the roofs over many homes and destroyed properties worth millions of naira in the affected communities, the report also said.

A state lawmaker, Anthony Onyibe Nwegede, had his properties including a Prado SUV, Lexus SUV Fx 300, and a Carina E model car damaged. The report claimed the perimeter fence of his home collapsed on the automobiles.